How to clear the jump on White Land II?

I've been playing F-Zero a lot lately, along with a bunch of other "retro" games. I'm having a bit of trouble on the course "White Land II" in the Queen Cup. The course contains a slippery turn, followed by a long jump shown below. 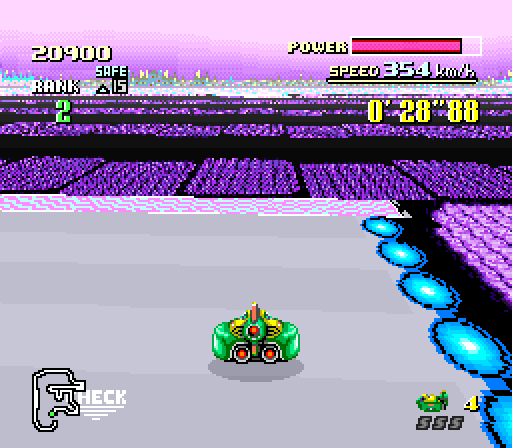 I'm using the Fire Stingray which, as some may know, has a high top speed but somewhat low acceleration. I think the problem is that it is close to impossible to attain enough speed given such a small straightaway.

How to clear this jump? For reference, I attempted the jump at approximately 379 kilometers per hour, with no luck.

Hold the down arrow on the D-Pad! Do this on any jump (and continue to hold down until you land) - you'll fly further and maintain top speed when you land

Cut the inside of the previous really hard and use a boost.

4
Is it possible to complete Death Wind 1 in first place, using the Blue Falcon on Master class?