What does it mean to play for picks?

Just played a competitive match where I was outnumbered 4 - 1, and someone on my team said "Play for picks, don't play for objective".

I didn't really understand what he meant by that, so I still went for the objective since I didn't know what pick meant and I ended up getting kicked.

Anyways I want to know what playing for picks means? I looked it up online and searched it up and can't find anything.

If the opposing team's overall economy is low, it means they may only be able to buy low power weapons if you kill any of their players. Take an example of if you only have a pistol or an SMG and you kill a player carrying an AWP, in game cost $4750. By killing the player, firstly you can take that weapon for yourself or a team mate and save spending that money yourself, and secondly they may be forced to buy a much less powerful weapon unless they have a massive lead in the game and economy isn't an issue.

Team wise there are a few scenarios that this would probably get called:

If the T's have planted the bomb and have control of the site, the chances of retaking it alone are very slim. Meaning you'd probably die and need to re-buy next round. In this scenario, you could position yourself at one of the exit routes from the site, as the T's would have to exit the site before the bomb explodes.

Example: On de_dust_2, if the bomb is planted at A, I would probably play for picks at Long A gates or somewhere B side of CT spawn. Possibly even upper mid (Suicide), but there are less chances in this position. The position would depend largely on the weapon I had. If I had a sniper rilfe, I would take up long range positions like Long A, perhaps have a few peeks to get a pick and then fall back. With an SMG or pistol, you would want shorter positions, possibly mid doors area, where you can catch them as they run round the corner.

Here's a view of some of the positions you could take up (with the angles to watch) to get exit frags. The red dot is where you position, and the dotted lines show the angles to aim for kills. 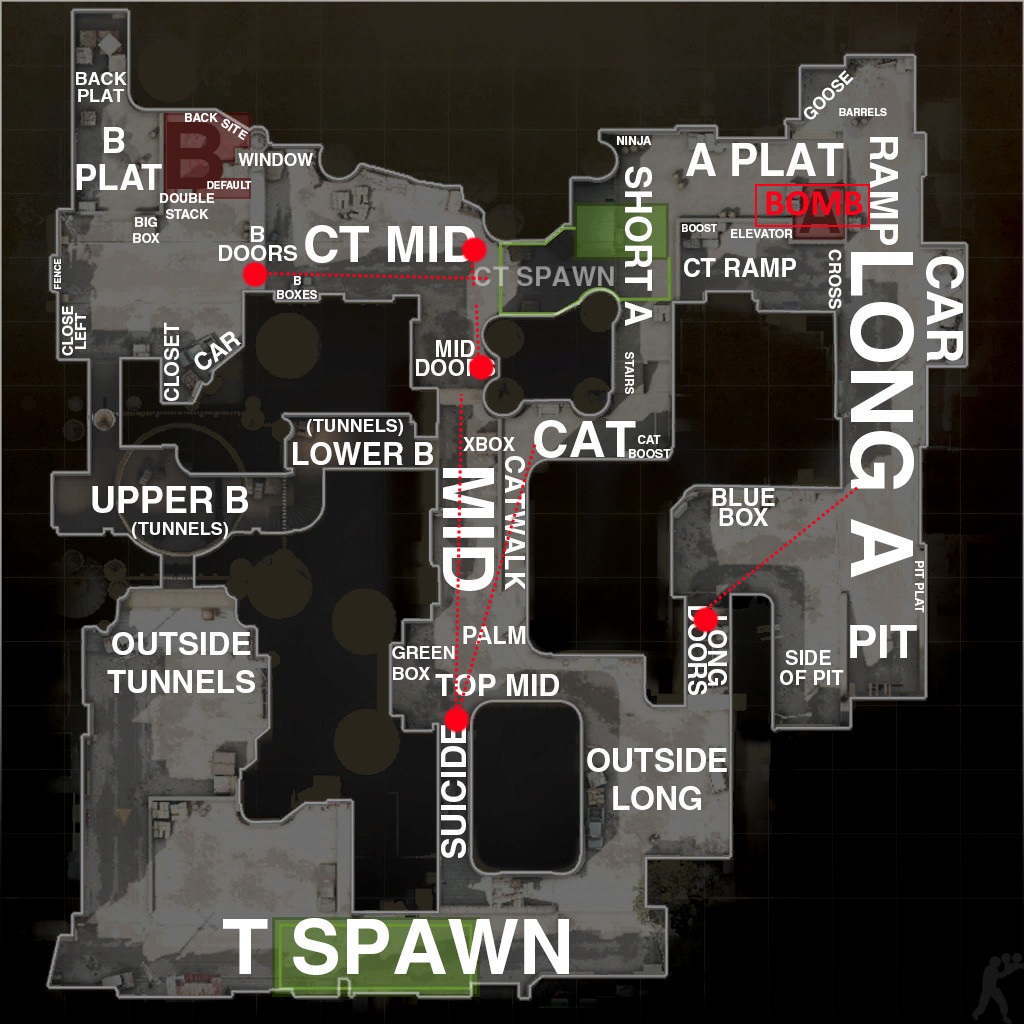 It all depends if they have intel on your position though. If they do, they're likely to try to push and kill you. If not, I'd say A long and B boxes are the safest 2 if you have a rifle as you have cover and can fall back if you get pushed after a few shots.

T-Side is much the same if you're heavily outnumbered. To save money/weapons, you can try to hide somewhere or take up positions around the map where you might catch a player rotating or peeking. If you get a pick or 2, again you have a chance to hurt their economy and salvage a better weapon for you or your team.

A situation where you might be asked to play for picks is in a B rush scenario where the team get mowed down and the bomb is dropped on site. If you had a bad spawn (hence you hadn't reached the site), or were playing sniper watching mid, or you playing lurk on A side, you might be a long way back.

If there are 2 or 3 players covering the bomb, your chances of killing them all and planting the bomb are slim.

If you have low health/armour, you're more likely to die if you engage alone against multiple enemies, which is often a good indicator you should save.

If you manage to get some picks, have a lot of health and are well equipped with weapons and nades, you could go for the clutch. It would depend on how long you have on the clock and any intel you may have on the opposing teams weapons, positions and health. If for example, you get 2 quick picks and have intel to say another player was on the other side of the map with a pistol, you could push for the objective as your engagement has become a 1 v 1 (until the rotating player arrives.

Good team communication is always helpful, but after they've given you all the information they have and you're at the clutch point, you should request they are quiet as you would want to hear any footsteps to locate enemies.

You can actually bind a key to disable team chat in clutch situations, as shown in this post:

Read (Console) Variables and print them

If it's last round or you have no money as you spent it all, you risk getting no income for surviving as a terrorist, sometimes it's better to die so you get income. You'd have to evaluate how much you're saving in terms or armor, weapons and grenades when saving on a round where you're going to lose.

Playing for picks means focussing on easy kills- picking off enemies one by one. This would even the numbers so you can actually go for the objective effectively.

1
Read (Console) Variables and print them

4
What does it mean to dominate an enemy?
7
What does “team collision” in CS:GO mean?
2
What do these parameters of Global Offensive's Bot Profile mean?
6
What do red names mean?
1
How does the spawn protection in Counterstrike Global Offensive work in Competitive Gamemode?
1
Matchmaking claiming I have to reconnect to a finished game
17
Did I get penalized for my opponent hacking?
8
“VAC was unable to verify the game session”
3
If I kill cheaters on my own team in CS:GO, will the match still count as a loss after they get VAC banned?