How do I infect Madagascar? 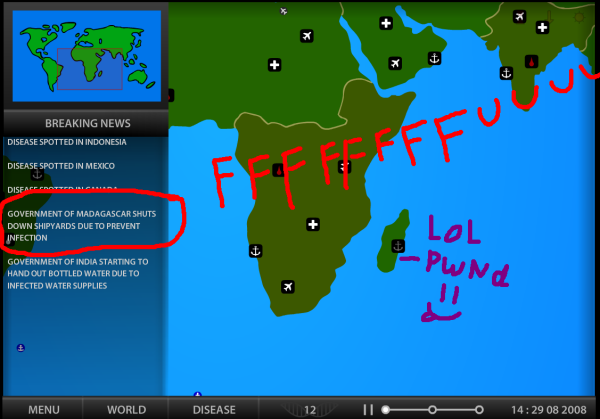 The country of Madagascar is only reachable through sea. This means that if the country closes its shipyard before I reach it there is no way I can possibly win… or is there?

How can I work around this?

Okay, so it's been a while since I beat Pandemic 2 and got Kongregate's President Madagascar Assassin Badge, but I'll try to answer with what I remember.

Be Infectious, but not Deadly

You can alter your infectious disease at will. Because infected people never become uninfected, it's a totally valid strategy to infect as many people as possible and then mutate into a 100% mortality rate disease.

Be Infectious, but Invisible

You do have to be careful however, because even decidedly non-deadly diseases may spark airport / harbor closure, which may make Madagascar the human's best hideout. Don't go for the High Infection, High Visible symptoms, it's counteractive to your goal of INFECTING EVERY PATHETIC HUMAN ON EARTH. Remember - transmissions lead to closures!

Or Canada, New Zealand, Cuba, Greenland, or West Europe. The point is, since these countries tend to be easiest to close, you may as well start there, to cut out on some headaches later. You can simply remake new games until you get one of these countries.

And finally, a TLDR from the Kongregate comments:

Generally speaking a more visible disease will make you suspectible to Madagascar closing the shipyard, the only way in, so sell all your starting symptons and be a parasite. Apparently rodents travel on boats, but when trying to get rodents to infect Madagascar they spread the disease to quickly and Madagascar's paranioa kicks in. Buy level two drug resistance, but save heat and cold resistance until at least ONE country other than your starting region is infected. When you start to spread out of your homeland by vomiting to speed spreading until five countries are in your empire of microbes. When you spread to a new country you will quickly start to infect yet more countries normally, but this strategy makes it SLOW, and when one country starts shutting down infrastructure or enforcing curfews, others will follow.

If you haven't got Madagascar by this time you are probably to late, but play for maybe another month or so after it's closed ports and see if you get Madagascar. At this stage vaccine will probably begin development, so by full level drug resistance and (maybe) vomiting. If you've almost infected everyone start killing them now. Note that sometimes vaccine doesn't work, or even makes you more lethal, but two times out of the four times vaccine has been developed in my games it works, and prevents me killing people (but that was before I evolved to be deadly). Once you've got every country bar three or four buy rodent, insect, air and finally water transmission and really ramp up your resistance. If a country has closed borders, no active air or seaports, and no water by this time and they are still not infected, forget it. Then buy symptons which increase infectivity. Once you've infected EVERYONE (take no chances), start killing people. You should have at least fifty, maybe even a hundred evolution points, so you may as well buy tier four stuff (heart and brain faliure). If you're a tad short of evolution points, buy fever, vomiting, fatigue and diarrhea, as well as stuff like hemorrhaging. This deadly cocktial should easily kill people.

When I used this strategy half the time I infect Madagascar (1st and 4th time), but on the 1st time Peru managed to escape. On the 2nd and 3rd time Madagascar escaped. But on the 4th try (started in Brazil with Mutator trait and heat resistance 1) I infected Madagascar (it wasn't last, in fact it kept the ports open for a while), then Russia and USA (you can get them after they close airports and ports, but if borders are also closed you're in trouble). I bought all transmissions and vomiting, and I infected about a billion people in a day. When I had about 8 healthy people left I bought Pulmonary Edema, Fatigue, Fever and Hypersensitivity (I had to buy Tiers 2 and 3) because the vaccine was being deployed. The vaccine worked but because I had mutated before deployment I kept killing. In about a month (it was new year) 90% of people were dead. Before March 2009 I had succeded/

It's been a while since I've played this game, but I had better luck with infections that have a less pronounced effect.

Avoid any abiltiies that say "will make an infected person noticeable."

2
How do I minimize Notoriety?
3
How can I take advantage of the afflictions?
1
How can I resist the vaccine better?