In Pokemon Go when catching a Pokemon the throw can be rewarded with an experience bonus (if the catch is successful). The possible throw bonuses are nice (10 exp), great (50), excellent (100) and curveball (10).

I have a theory, simply based on personal experiences, that achieving a throw bonus could increase the catch rate of the attempted capture.

Is there any evidence to suggest that this may actually be the case?

You are right. On this site you can find exact values for everything related to catching Pokémon. The Values of the catching rate bonus are

You have to multiply the catch rate with the values above. The given link also provides a table of catch rates for every Pokémon and Level.

For updated statistics, please have a look on Vemonus' answer: https://gaming.stackexchange.com/a/288122/138694

It has been stated that the catch rate does increase when you get a nice, great or excellent throw.

throw bonuses will confer a boost to the base catch rate for that Pokemon for that throw and all future throws.

Forbes and many other sources declare that this is true as-well.

The longer you hold onto your Pokéball, the smaller this ring gets before resetting to its largest size. You get an increased capture rate for hitting inside this ring

Answer: No one officially knows yet. It's frequently a controversial topic in terms of anecdotal evidence: some players say they notice an increase in capture rate, others don't - however, in general, most players seem to be in agreement that it does confer a catch rate bonus.

Below is an explanation of why the capture rate bonuses detailed on certain websites (such as ones in the above answers) are misleading and based on unverified claims.

The closest thing we had to an indication that it does affect the rate (besides anecdotal evidence) is within the protobuf file for the game. This is a list of numbers within the game that detail things like medal achievement requirements, experience bonuses, gym experience numbers, etc. I've provided the link below:

Within this protobuf we can see that there are only two values related to throw types. The first is an item detail for each type of ball, e.g. for greatball:

and the second lists "thresholds" for each type of throw:

Some people saw these numbers and assumed it meant the catch rate multiplier...however others speculate that:

To elaborate on point 3:

The answer here says for nice, great, and excellent the percentage of the inner circle to outer circle diameter required would respectively be: 100%, 70%, and 30%.*

To clarify/reiterate for people unfamiliar with throw types: you have to not only have a smaller circle to get a bonus, you have to hit the pokeball inside the circle as well.

To translate these numbers into the threshold numbers, all you have to do is see that:

let x = the value upon impact based on the distance

Take (2 - x) and you see that the thresholds as detailed in the protobuf line up with the percentages.

Here is a link that details actual data communicated with the servers and basically confirms that the values of 1.00 - 1.99 were the thresholds when that protobuf was published (and also explains how these numbers have to do with why there was no bonus exp for throw types for one patch: the 'x' value was changed from 1.00 - 1.99 to 0.00 - 0.99 and thus no one could achieve the 1.3/1.7 required for the bonus except for hackers).

*NOTE: This is not a definitive source, but it lines up so perfectly with the explanation and numbers that it's very likely true.

This was posted today on the Silph Road subreddit and has pretty conclusive evidence that catch rate is indeed influenced by throw bonuses.

The controls of the experiment were as follows:

Here is a table with the results:

From these results, it looks like the 1.1x Nice, 1.3x Great, and 1.5x Excellent multipliers are a bit exaggerated.

From the numbers above, it looks like the actual bonuses are roughly:

Additionally, another article by the Silph Road was posted yesterday that confirms that curveballs also increase catch rate. For the full details of this experiment, look here.

Here is a chart containing the results of the experiment. 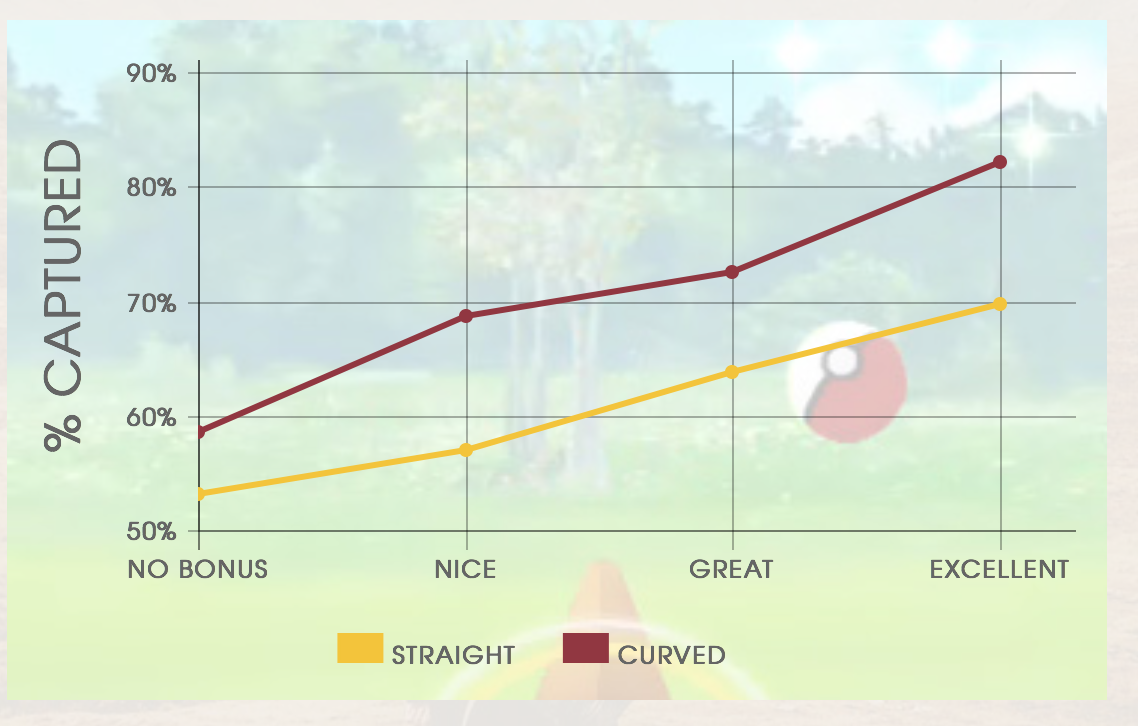 61
What are the possible catch bonuses and how much experience do they reward?
20
What are all the factors which affect catch chance?

61
What are the possible catch bonuses and how much experience do they reward?
40
Does Razz Berry work for the next throw or catch?
15
Determining Catchability of a Pokemon without wasting a Pokeball
2
Anyone else not getting bonus XP for "Nice!", "Great!" or "Excellent!" throws?
20
What are all the factors which affect catch chance?
34
How does the new catch bonus work in Pokémon Go?
1
"Excellent" Charge Moves in PvP
6
What circumstances grant me the Nice/Great/Excellent catch from my Buddy?