How do accumulators factor into the power grid?

I understand how accumulators work, but I don't understand the "math" behind them. For instance, one steam engine can produce 510kW of power. Accumulators seem to measure in joules (I believe that is what the J is for).

If you look at the screenshot, you can see I am producing 89.5MW of power, and the accumulators have 3.7MJ of power (which goes down over time). How exactly do accumulators factor into the rest of the power grid if they are using a different unit of measurement? I would like to know since I am running into some major power issues with all my factories and robots running. 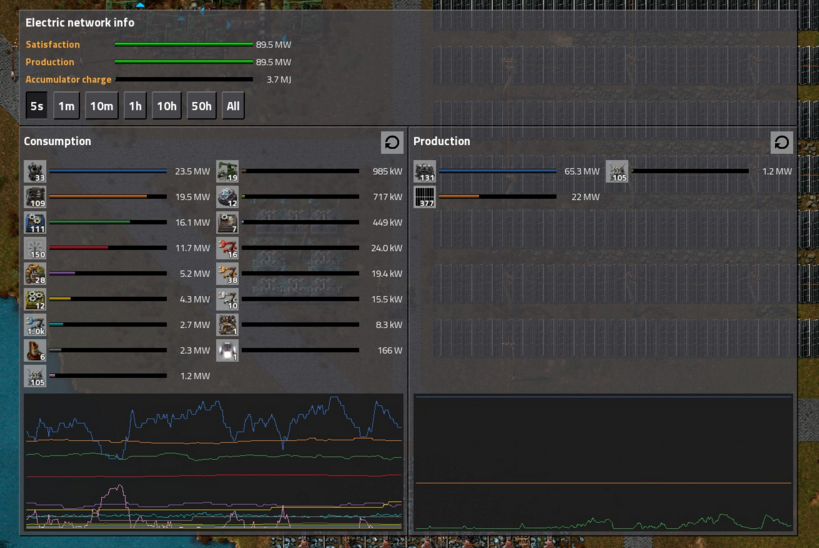 However each accumulator can provide 300 kW/s and stores 5MJ of energy per accumulator. (1 Joule = 1 Watt per second). According to the linked Wiki page, it takes roughly 17 seconds for a single accumulator to charge/discharge at the max rate of 300 kW/s. I have no idea how long night lasts, but it's significantly longer than 17 seconds. Given the above scenario, you're going to need at least 34 accumulators to provide 10MW/s of power collectively, and they will be able to do that for 17 seconds.

It sounds like you need more accumulators than you currently have so that they last through the night. I like to set up a builder to automatically create accumulators and just forget about it until I need to build more.

I like to build accumulator blocks in the following fashion:

Where A is an Accumulator and S is a Substation. I've got many many many of these ones built for my factory along with the popular solar panel plant design where you use substations, solar panels, accumulators and robo-ports together to build large tracts of solar panels separated by accumulators.

It's worth noting that if you're doing a large scale operation involving lots of robots (for example using them to lay concrete, or the large scale building of solar plants) the robo-ports will draw a very large amount of power while they are building. I had this happen multiple times where my robots drain my accumulators overnight while clearing large tracts of land. The solution was to place more solar panels and accumulators to store more energy. I'm up to about 3.2 GJ of accumulators I think.

6
How do (construction) robots select the Roboport where they recharge?
9
How do I get the most solid fuel out of my crude oil?
3
How to restrict the use of storage chests by distance?
4
How do the odds of producing Uranium-235 and Uranium-238 work?
8
How to always keep steam turbines running at maximum performance using nuclear power?
4
How do I determine the actual amount of power my nuclear reactor can provide?
4
How can I locate my disabled train stop among many stops with the same name?
5
How do I set an inserter filter based on the contents of a storage tank
9
How to play the levels 4 and 5 of the Factorio tutorial in multiplayer?
8
Can I make landmines snap to a grid?