How often will an opponent be bashed?

I ran into an interesting problem while trying to figure out the average time a hero would spend stunned if they were attacked continuously with a bash item or ability.

For example, if I was playing Slardar, and had a 25% chance bash for 1 second, and could attack twice a second, then what percentage of time can I expect my opponent to be bashed for? I want to know what the increments are, so that I can figure out when it's worth it to level that skill.

I came up with the following state diagram to help me through it. The states represent a half-second period after each attack. 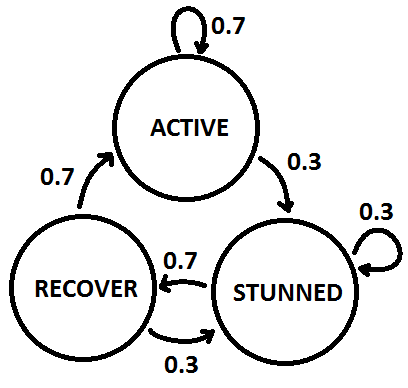 Note that new stuns will refresh old ones (not stack). For example:

Is there a formula which would fit any number of seconds, and any percent chance of stunning?

As it was commented the 25% isn't a constant in each attack but more an average of times it will proc from a bigger pool of attacks.

How does it work, the real chance to stun is 8% per attack at full level, every time it doesn't proc this chance is increased another 8.5% until stuns the target and then it resets to the base of 8%.

Max N: The minimum number of hits that would occur until the next one is a sure proc: 12

Most Probable N: The amount of hits to get a proc: 3

Average N: The average hits until get a proc 4.02

If you hit every 0.5 seconds and the average proc it's at the 4.02 hit then the target could be stunned every two seconds.

5
If I get a Dota 2 beta key, will I get to keep the game after it's released?
4
How to test mechanics
3
Will solo matchmaking match you solo players from the main queue?
1
If I leave during the pick phase will I be penalized?
6
WIll a hero with damage over time die if he is banished?
6
What will happen if i wear 2 different Legendaries? (hook and beard)
4
Is there a file will all the loading screen tips for Dota2
7
How often do siege creeps spawn?