Can you kill the Drake in the Undead Burg?

I know if you cut off the Drake's tail you get the Drake Sword, but is it also possible to kill him? I know in Demon's Souls there were a couple dragons which couldn't be killed when you first met them, and would simply fly away after their health was low enough. 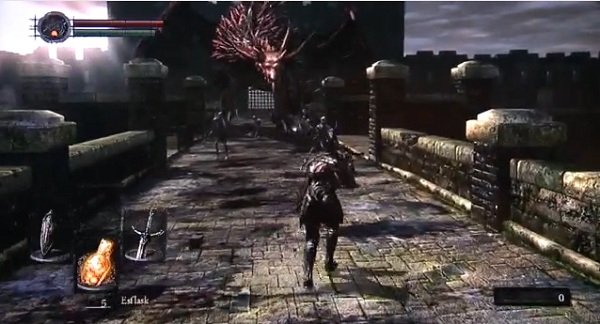 Does the same thing happen here, or is it possible for me to kill the Drake? If I do kill him, what is the reward?

Yes you can indeed kill him, and you get 10 000 souls when you do. As far as being killed with arrows, unfortunately I could not get a clear answer. The consensus on the forums I've looked through seems to be that he'll get down to about half health, at which point he'll cover his head, seemingly healing himself. There have also been several glitches reported where he died randomly.

Here is a video of somebody accomplishing the task:

You can kill the dragon. In fact, I managed to do it with a single arrow, and I was pretty low level. I'm not sure if it falls under one of the glitches mentioned in the other answer though.

Here's how I did it:

After going through the short section under the bridge and climbing the ladder past the rats, there's a staircase immediately on your left that goes up a tower. At the top of a tower is a Black Knight. If you can deal with the Knight, you can get a clear shot at the dragon from here. I'm not sure if the dragon was sleeping or what, but after I shot my first arrow, it looked the the dragon got startled and jumped of the bridge he was on. I thought he was just circling around or something, but a few seconds later, I had collected the 10,000 souls and the dragon was no more.

We killed the Drake tonight through a combination of:

Shoot Drake with an arrow, wait a moment to be sure he comes down to bridge. Dash out onto bridge and strike his head, then quickly run back down the stairs. Sometimes we could get two strikes in before we ran back down the stairs to safety. Repeat process as needed until he is defeated. Be careful, if you step onto bridge too soon after shooting him he will spit fire from the top of tower. Sword used: Drakes tail, dealt about 111 points per hit. Arrows: he just used standard arrows, they dealt 5 points damage per hit. To get the DrakeSword go to the lower area of the bridge and shoot the Drake's tail anywhere between 20 to 50 times, depending on the arrows used it could be more, after enough hits the DrakeSword will automatically appear in your inventory.

Yes, I also did it with arrows (~150 standard). I was also under the bridge, but halfway back. I would strike him in the neck (~12 hit points) and then when he would fly back I would time it to hit him in the chest. Then he landed and I would repeat.

It's quite easy really.

Begin in the room below the bridge. Make sure you have a bow with 10-20 arrows and a weapon in your right hand so you can quick-switch between bow and weapon.

It only takes a handful of hits with the drake sword.

Taken from this video guide, the best I could find so far to kill it in a "legit" way (no arrow bug):

I killed it with arrows. How I did it was I went under the bridge and got in the corner right past the door with the rats in it and then pin cushioned him. He will fly back and forth but since he does not relize you are the he will not leave or heal.

The wiki has a basic strategy for taking out the Hellkite Drake.

In earlier versions of the game, the Drake did not have a regeneration factor, making it more of a marathon, but fairly straight forward to take him out. There were also a couple of exploits* that could be employed to take him out, but have since been patched in later versions.

Now, the main consideration to account for is his Regeneration. As @bgalin mentioned in his answer, once his health drops below a certain point, he covers his head and begins to regenerate his health, making it nigh impossible to kill him using a ranged method, depending on your stats. This only becomes more potent with each NG+.

Using a melee approach nullifies this, as he is constantly aggro'd, and never returns to his perch (so long as you keep in his focus, and not retreat). The only considerations here, are Fire-resistance; like using "Flash Sweat" pyromancy, and high Fire-resistant gear, and Lightning damage. You can imbue a weapon, or use the Gold-Pine Resin as a quick alternative.

*There used to be a bug, where if you climbed up the tower behind the Hellkite, and shot him in the head, he would aggro, and jump down onto the bridge (which wasn't actually rendered), at which point it would plunge to it's death.

I just confirmed that you need the longbow to kill it from top the Dark Knight tower with 1 arrow. Does not show up from there when you have shortbow. Once you get longow go back and 1 hit KO the guy with no problem. PS: if he still won't appear, try leaving area and dropping shortbow, then returning. I didn't need to but could be a solution.

2
Are there any missable item in the Undead Asylum?
2
How does stat scaling improve with enchantment?
3
In Dark Souls, do you need a slashing weapon to cut off Seath's tail?
4
Is it possible to kill Ornstein and Smough at the same time?
2
Is there an easier way to get the Drake Sword?
6
Accessing DLC without giving Lordvessel to Frampt or killing Sif
4
Is there a shortcut from the parish to Undead Burg in Dark Souls?
3
Exploring the City of the Undead - How can I recover my possessions here?
3
Does the Hellkite Drake behave differently on XBox 360 compared to on PC?
14
What are these white rings in the Undead parish?