I accidentally updated, but my replays are still there - why?

I have a ton of replays saved, which I wanted to convert to video before the update hits, as the new update comes with balance changes, which I would expect would make the replays from older versions unplayable.

From what I understand, the replays you take after each match are simply a recording of all the events and inputs that happened in a match. So when you watch a replay, the game simply recreates the whole match based on that info. That's why you can interact with the replay and change the camera around for example.

So if an update comes with balance changes, the game shouldn't be able to replay the data. Say you had a smash attack that takes longer to execute in the new patch. If you attempt to watch the replay from before the patch, the changed smash attack would throw the whole thing out of sync, wouldn't it? That's why they always warn you of updates and how replays would be lost... or so I thought.

I was horrified today when I realized the game had updated when I wasn't looking. I expected all the unsaved replays to be gone, but they were still there. And yes, the game was updated, as I was able to play online. From the few replays that I tried to watch, they seemed to work perfectly fine... but why?

I don't get it. Why can I still look at the old replays? Do I have to fear some of the replays might be gone and it simply kept all salvageable replays? Or do the replays somehow play back using an older version of the game? If so, why do they warn us in upcoming updates if that's the case?

It's been awhile since I've been home to play Smash on my own Switch, but I finally got the chance last night.

Upon opening Smash, I was prompted with the screen below with some Version 3.1.0 details. I've highlighted one bullet in particular (the system wouldn't let me screenshot this, so enjoy a picture of my TV): 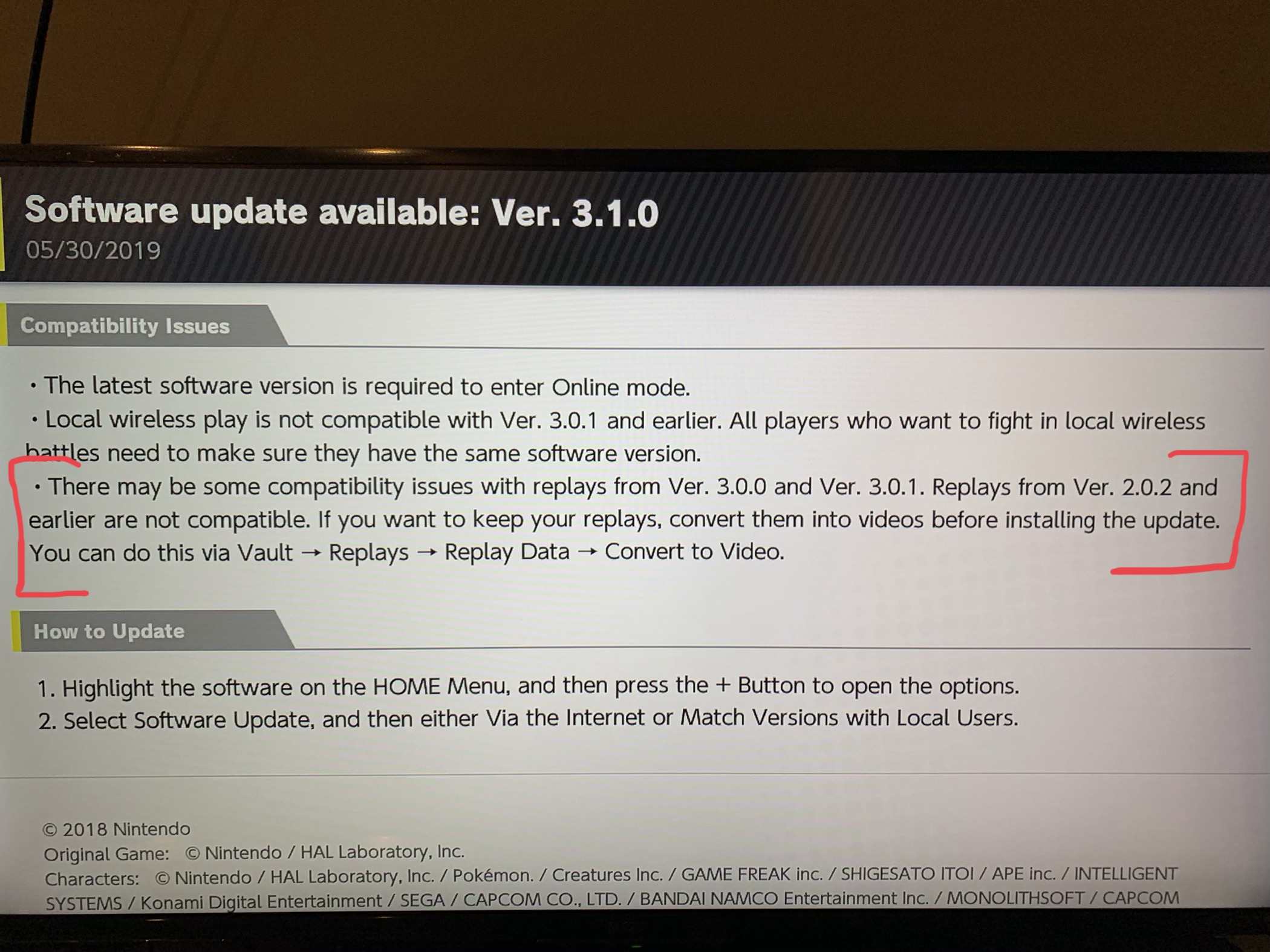 It sounds like Nintendo only "invalidated" replays from 2.0.2 and earlier (the last update before 3). 3.0.0 updates on the other hand, they've left with a warning that "there may be some compatibility issues."

It looks like these "compatibility issues" are exactly what you're seeing--but at least you didn't lose all of your replays this time!

We're not really sure yet how or why 3.0.0/3.0.1 replays are still usable in 3.1.0. The leading theory is that the game knows what characters/stages are unchanged and so doesn't need to invalidate replays that only use them. The other major guess is that the game actually has both datasets saved and will pick the one that matches the replay, though I haven't seen any proof of this yet.

17
Are there any differences between real and fake smash balls?
8
Is there a way to know how many spirits are left in Adventure Mode?
6
Are there any spirits that equips either a Hammer or Golden Hammer?
18
Are there any Final Fantasy Spirits in Super Smash Bros Ultimate?