Can I see the result of my Tribunal judgements?

How can I see the result of my League of Legends Tribunal judgement? I want to know if I should be judging slightly harsher or much more harshly so my views align with the "community", so I get more +5 IP boosts.

There are currently no plans to ever make this information available. Riot employees review all cases that result in a permanent ban, and they reviewed EVERY case when the tribunal was first released. You gain IP not for voting the same as the rest of the community, but for voting how Riot's staff would vote. Admittedly, not every case is reviewed by Riot anymore (those that just give out warnings) but players who are still voting in the tribunal today are those who voted in accordance with Riot's policy since it first came out.

Just ask yourself how a Riot staff member would vote on the case you are reviewing, and do likewise.

Remember that the 5 IP bonus as an incentive is still fairly low for the time invested. If you want to make easy IP, it's faster to simply play several bot games (under the new AI update, rewards are decent) The IP rewards are there to avoid making players who are dedicated to the tribunal feel like they are wasting their limited playing time.

Everything Riot has posted about the Tribunal since the dawn o' time:

edit 2: Since this morning I only get the Tribunal in Recess Message, so I guess they are currently working on the changes mentioned in the Patch announcment.

For now, there is no way to see your case history in the Tribunal and the IP you've been credited for. You should receive e-mails every few weeks outlining the cases you got correctly and the IP you received though.
There is currently a 15-case limit per day for most Tribunal users.

Also after the Tribunal changed you do not get IP Boosts anymore but only some Influence Points (IP) are added to your account.

edit: In the Patch announcement video for the World Championship Hotfix, Riot announced to change the Tribunal again. In the near future there will be a list of your cases along with some stats. 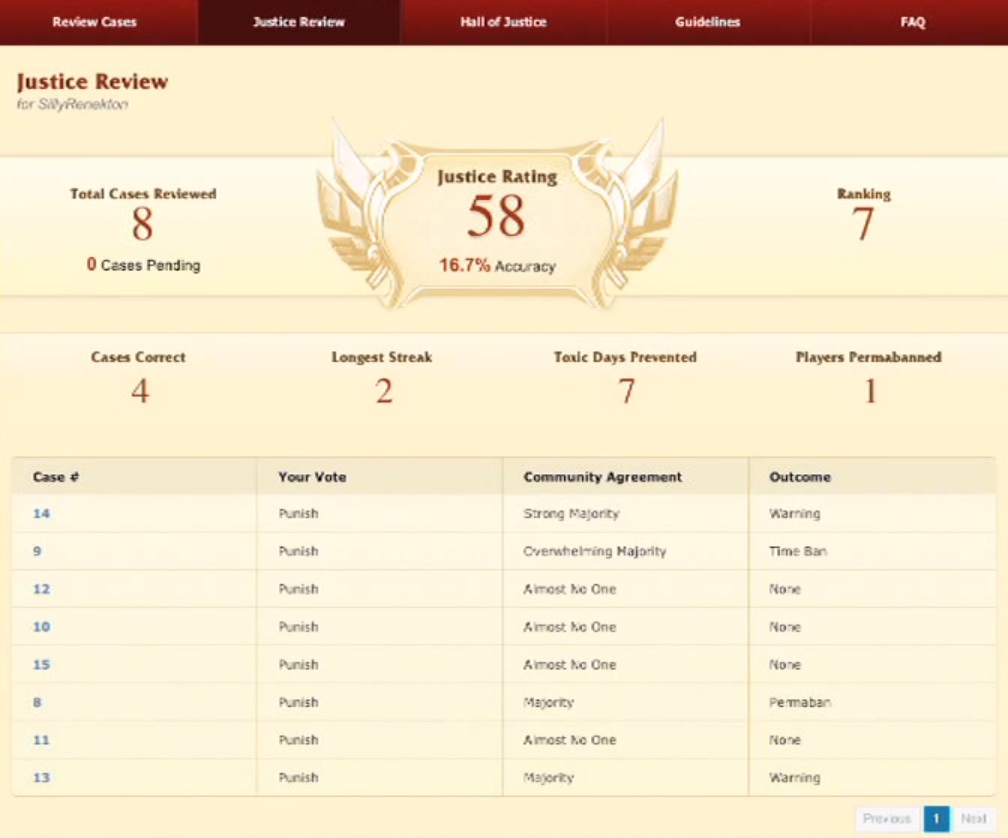 Screenshot from the video @4:43

There will be a Tribunal ladder named Hall of Justice, too!

User question: "Hello. I was wondering if all derogatory are an automatic "punish." Meaning everything that is prejudicial concerning race, sexual orientation, age, drug use (Calling someone a stupid stoner, or something along those lines), pregnancy, the list goes on but are any derogatory terms that prejudices a certain group an automatic "punish?" Thanks for your time."

Riot: We want to encourage players to decide these boundaries. Just use your best judgment and we'll take care of the rest!

I myself look at the chatlogs most of the time. When I see someone being insulting: instant punish. When a player was reported for feeding or assisting the enemy team but he did not flame, curse or hatespeech in the chat but typed some constructive things like miss, drake up, ward/gank I tend to pardon. Just remember what you read in the Summoners Code (hope you actually did) and decide on your own.

And do not forget: erveryone can have a bad day and play sub-par from time to time ;-)

This information is as yet not available.

6
Formula for normal attack damage calculation in League of Legends
5
How does rune combiner work?
10
What determines time spent dead in League of Legends?
6
How do you get Tristana for free?
8
What does the option “Use Movement Prediction” do?
3
What is the value of ip and xp boosts?
0
What team compositions are viable?
4
What is the structure and schedule of official League of Legends competitive play?
4
Risk of data usage with League?