How to master shooting while running?

I am starting off with MW3 and have been watching some videos from other players on YouTube. I feel like they do a good job of killing enemies on the move while moving from one location to another.

I do good if I camp out in one location and shoot enemies. This has some limitations, though.

I understand practice is the best way to achieve this. Beside practice, are there other things like sensitive settings, perks like "Extreme conditioning"?

I think you're specifically referencing survival mode here. The issue with survival mode isn't that you need to get the drop on enemies, so much as it is that they are plentiful and well distributed throughout the map. It's quite easy to get surrounded in many areas of the map, where 3 or more enemies are attacking at the same time.

What you might do is practice runs around the map where you are trying not to stay in locations where you might be approached from multiple angles. Enemies tend to spawn in waves, so if you get a good run around the map going, you can kind of "train" them into a pack that will only attack from a single direction. This will allow you to more easily get to cover, since you can generally predict how the whole pack will move.

Focus on corners - you want a route that includes many corners, so that you can block their line of fire quickly. Avoid dead ends, as you'll be quickly overwhelmed if you're backed into a corner.

When it comes to the Juggernaut rounds, I try to give the Juggernauts many targets, and have body armor on. Since they move slowly, try to leave them for last, or at least for a break between enemy waves.

Having sentry guns and "sacrificial" riot team and Delta team squads can give you enough extra firepower and "meat shields" that you can take them on toe-to-toe. Flashbangs will stop them from firing long enough to generally get a clip off into them. Aim for the head.

You can also get them to try to melee you instead of firing if you get close, and then quickly back away. Their melee animation is long and can give your "backup" time to fire, but you need to ensure that you don't get hit, or you'll be in trouble.

I find perks like Quickdraw PRO are very helpful since it helps you aim down your sight 50% faster. Also Steady Aim Pro for better accuracy shooting from the hip(not having your gun down the sight) and also aim faster while sprinting. Sleight of Hand Pro or Extreme Conditioning Pro are good for the run and gun type.

Do the spec ops called STAY SHARP. This will def get you prepared for a fast paced environment with enemies popping up at you.

I also find that always having my gun raised around corners helps and if you know someone is around get into prone since it is harder to spot you since they are always looking up.

This chart will show you which guns have the fastest raise time and you can pick and choose from there. Link of it here if you want to see it bigger: http://mp1st.com/wp-content/uploads/2011/11/N3N1V.jpeg 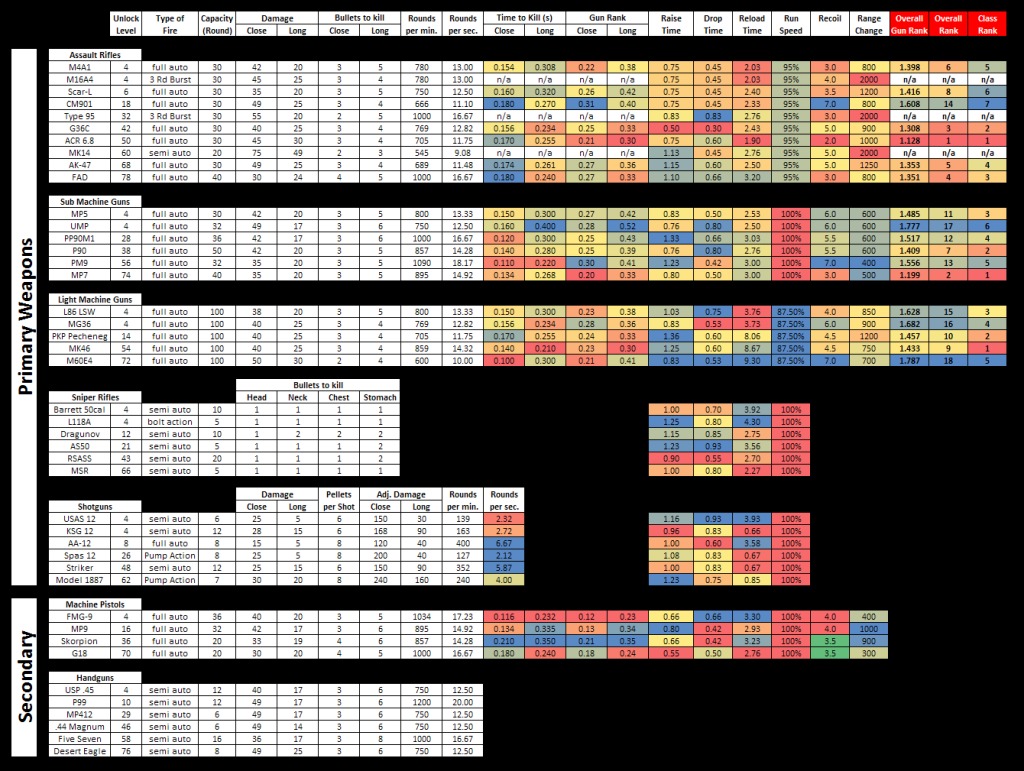 Not the answer you're looking for? Browse other questions tagged call-of-duty-modern-warfare-3 or ask your own question.

6
Modern Warfare 3 Crashes on Launch: How can I get it running?
5
How to counter a heartbeat sensor?
1
Can you talk to people while you're spectating in Hardcore Team Deathmatch?
6
Can you jump while wearing Juggernaut armor?
2
How do I shoot while carrying a riot shield?
2
Does running MW2 means you can run MW3?
2
What is the sprint speed while carrying C4 in MW3 Survival Mode?
7
Do the bullets that bounce off riot shields and kill people count as a kill for the person shooting or the person with the riot shield?
4
Do you show up on the radar while shooting with Assassin but no silencer?
4
How to be a good sniper?