Do numbers in skills scale or otherwise change?

In all the skill descriptions, the numbers are green. In other games, I have seen this used to indicate values which can change, but the skills pages don't seem to have any info on this. In Diablo 3, is this just to make them stand out or does it indicate values that can change? If they can change, what makes them change?

For example: The life gain from the monk's passive skill Transcendence has been increasing. Why?

The truth about these numbers is much more mundane. Simply put, the way the abilities are coded, all of the green numbers are variables.

Runes used to have quality levels, with each successive level of rune increasing the efficacy of the skill. This is why runes like Arcane Torrent's Cascade list "a 100% chance", instead of saying "whenever" or "always" -- if you used a lower level rune, it wouldn't be a 100% chance.

For Abilities and Passives

For abilities, the thinking is mostly the same, though the rationale is different. Essentially, by designing the abilities in the way that they did, they've made it very easy to tweak and balance the individual abilities against each other.

Consider, if you will, Bolas Shot. 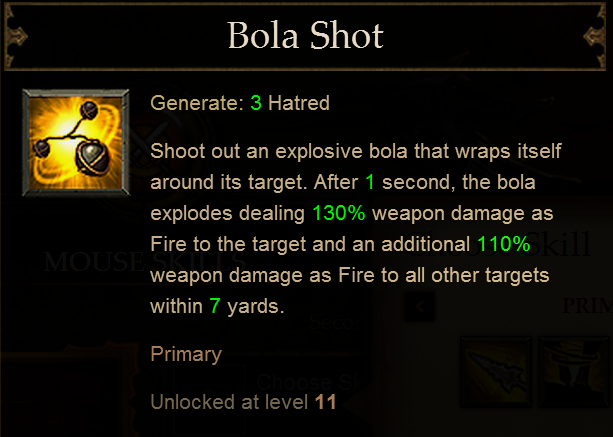 Notice which values are in green: The hatred generaiton, the delay, the initial damage, the splash damage, and the splash range. Now imagine that Blizzard determines bolas shot to be horribly, horribly overpowered. They have to nerf it. What do they change? Well, because of the way they built the game, they already have 5 "knobs" to tweak in an attempt to better balance it - the five variables in green. Even when one of the green values isn't affected by any of the five runes, it's still useful as a tuning mechanism.

This happened in beta all the time - the balancing patch notes would always tweak the green values, and leave the rest of the ability untouched.

There is also a subclass of skills and abilities which have the green text because they scale with level.

Most healing abilities are this way. In these cases, the text is green to signify that the value is not constant (because, again, everything in green is a variable), and is used instead of listing a formula (which would be constant, but would be bothersome to calculate manually each time it changed).

Even here, the underlying formula can be changed, with the same results as tweaking the formula in one of the non-scaling abilities above.

As you said the green color is used to make them stand out, you mostly remember what your skill does but there are many occasion you want to recheck some of the values, one of them often being skill damage comparison.

Due to mixed types of values we can't say that green is used to mark values that change which is usually the case.

The green lettering indicates aspects of the skill that can be modified by runestones. If you look at the runestone tooltip after you apply the runestone you can see how it affects the skill. For example when "Clobber" is applied to "Bash" you can see the 20% chance of Knockback is replaced with 35% chance to Stun. 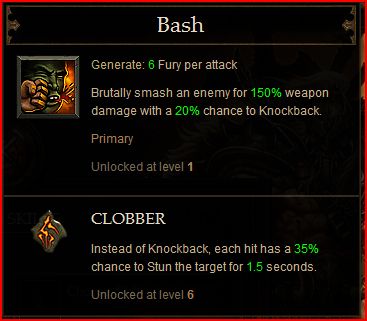 There is an awesome calculator here where you can see different effects.

Since it's just a number value, it is used to make it stand out more so that with quick glance you know what you are looking for. You see the green and know it's for a #'s value. A quick glance is all you have time for as opening your skill bar does not pause the game.

2
What do the numbers mean on the passive skills section of the skill calculator?
6
How do I respec my character in Diablo 3?
3
Can I use two primary abilities at once?
1
Why do I occasionally see lightning forks shoot out of my attacks?
2
When should I consider using the Auction House?
9
Which other skills complement Chakram?
7
Making Skill Choices
4
Is my Spirit (or any other ability resource) rounded up/down?
2
Is there an internal cooldown on the Reclamation rune for Mantra of Conviction?
10
Does Prodigy take effect for each hit of multiple hit abilities?