Which Demon Hunter build should I use for Nightmare?

I had no trouble as a Demon Hunter in normal difficulty. Now, I've graduated to Nightmare and it seems even the easiest mobs can annihilate me within seconds. Until now, I've been employing a Chakram-centered build but it's not really working; the Chakrams are too slow and don't do enough damage on their first pass.

Which demon hunter build should I utilize on Nightmare if I want to solo?

I have a lvl 50 Demon Hunter. Let me teach you how to be a pro. Once you hit level 45, demon hunter just gets so damn powerful and literally invincible.

I have posted each skill below followed by which rune you should use in brackets. I will then provide an explanation as to why this is the most effective build.

I have also set 2 builds you should use, one before level 45, and one after 45 due to the newer runes available.

You will notice that under Devices (3rd skill), I have switched on ELECTIVE MODE (options ----> Gameplay ----> tick elective mode), allowing me to slot in whatever skill I choose.

Note that this build is aimed to deal the highest amount of damage possible, at the same time providing you with superior survivability.

Note that this build is mainly used during the process of completing missions and NOT fine-tuned for fighting bosses, feel free to adjust your skills for single target damage when fighting epic bosses.

Defensive - Smoke Screen (Lingering Fog) - Skill explanation doesn't actually tell you that you turn invulnerable. Lingering fog provides you an additional 3 second invulnerability, total of 5 seconds being invulnerable. Higher cost of discipline, but no cooldowns, it is a very fair trade. Absolutely OP.

Hunting - Vault (Tumble) - Equivalent to Vayne of the league of legends, this skill makes Demon Hunter THE king of kiting. Tumble like a boss away from your enemies when they get close, and continue to wreak havoc. The rune lowers the discipline cost of a 2nd vault within a short amount of time. If you can't juke, don't play demon hunter.

Companion (Bat Companion) - Prior to my noobness I did not realise you can use Elective mode to swap in any skill you like to fully utilize the awesome customization of skills (Toggle it under options ---> Interface).

Originally, I rarely use any 3rd skills; evasive fire is just pointless when you have vault; fan of knives is stupid because you are not meant to be a melee or get close to enemies for all that matters; spike trap is alright but the 30 hatred cost is just stupid when you have Multishot as your 4th skill. So all thats left is Sentry, which is like the Wizard's Hydra. It's alright as provides you with some extra damage. I still rarely use it UNLESS I AM SOLOING DIABLO when i kite around him and it is just funny watch my sentry dealing damage while i run in circles.

Now that my noobness has been eradicated, I use Bat Companion due to the awesome Hatred regeneration, along with the extra 54% weapon damage my baby bat deals this skill is just sick. More trolling with my extra hatred? I WILL TAKE IT!

Archery - Multishot (Fire at will) - A Godsend when you see angry mobs charging at you. The rune reduces cost to 20 hatred, meaning you can spam it for "165% x 2" as a MASSIVE AOE at a massive range in front of you. Deals insane damage. You might ask, why not Rain of Vengeance? Main reason is because enemies DO NOT STAY STATIONARY and continued getting showered when you are juking around; the second you cast it and juke away, who will you be dealing damage to?

Secondary - Rapid Fire (High Velocity/Bombardment) - Both deals more damage overall compared to Frost Arrow. High Velocity provides you with 40% chance to shoot through enemies, meaning it is pretty much the equivalent of a frost arrow BUT + 228% dmg instead of 170%. Bombardment deals some crazy mini AOE damage, 276%. Both are viable options, yes please to that extra damage.

Hunting - Preparation (Focused Mind) - This skill, combined with Lingering Fog, is what makes you invincible. I usually only use this when i fight harder enemies. You start a fight, when enemies come towards you cast Smoke Screen to lose aggro and continue shooting at them. Cast smoke screen again if enemies move towards you again. THEN you cast preparation if you STILL are trying to kill whatever it is you are killing. This will regen your discipline overtime ALLOWING YOU TO SPAM YOUR SMOKE SCREEN AS INVULNERABILITY for a few extra times. Like I said, OP demon hunter, is OP.

Archery - Multishot (Fire at will) - Same reason as above.

Tactical Advantage - Not the best passive for a fight, but I use it because I don't like wasting time travelling through the map. However, it is STILL a good passive for juking away from enemies, or smoke screening into fights to get healing globes. I like speed, this is just my preference.

Steady Aim - The extra 20% damage is OP as long as you stay AWAY from enemies. Remember you are a ranged hero, NOT a close combat specialist. Act like your class and do what you are meant to do.

Technically, to perfect this build you should swap out tactical advantage for "Perfectionist" post level 45 due to the 10% discipline cost reduction. But I don't need it because I destroy anyway.

Sometimes, it is just unnecessary to smoke screen/vault when you don't have to, especially when you can just left click away from incoming attacks and continue shooting. So save the discipline until you really need it. Of course...zooming across the map with vault and smoke screen is ALWAYS necessary :P

Remember the point of being a Demon Hunter is to deal massive damage and NEVER get touched.

I would also like to add that with Elective mode available for abuse, ABUSE IT TO YOUR LIKING! Remember a build is simply your personal preference of how you play, so use whatever works for you, and enjoy the game! 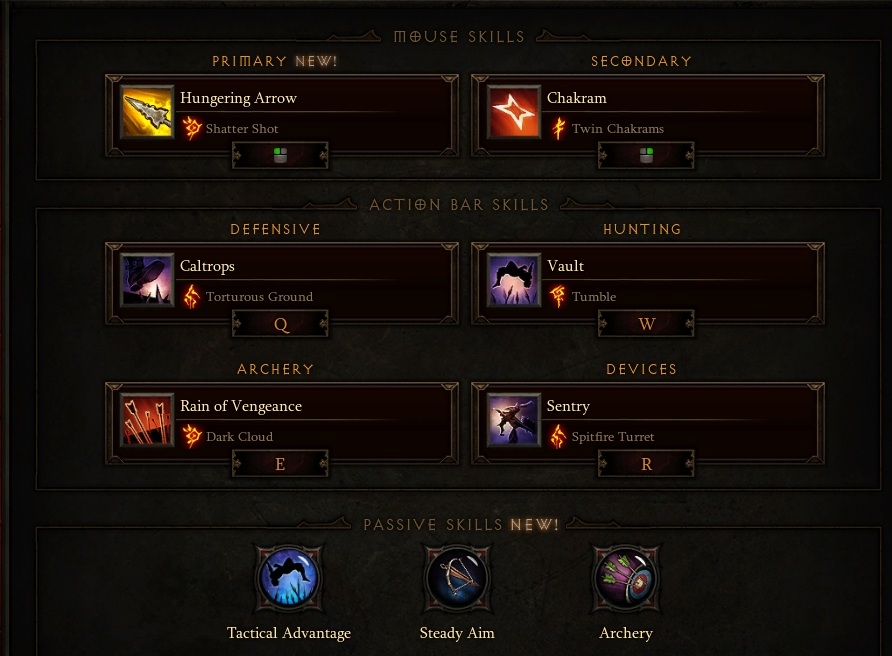 I use hungering arrow against far away enemies and when they get close i use (spam) Twin Chakrams.

Rain of Vengeance helps with clearing out large amounts of weak enemies.

I usually try to kite large packs around my sentry using Caltrops and use Rain of Vengeance helps to clear out the weak enemies.

I'm level 40 with 1206 damage using 2x1Handed Crossbows , i usually get hits between 500 and 800 from Chakram and can spam them fairly quickly. 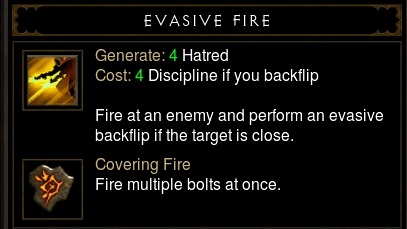 The damage seems to be a lot higher and it generates 4 hatred instead of 3. With the Covering Fire rune it hits 3 targets within the cone and with the stats i mentioned about i'm hitting for about 800 to 1k per target.

The only downside that I've discovered so far is that you can't use Evasive fire whilst fighting against Mortar enemies as it will backflip you out of the safe zone.

Chakrams and Ball Lightning (Elemental Arrow rune) have excellent damage, but the slow projectile is problematic. Here's my current early-nightmare DH build; as you can see I rely almost exclusively on Frost Arrow (another Elemental Arrow rune) for DPS, so I can wholeheartedly recommend it as a primary offensive ability for these levels.

A few shots decimate normal grouped enemies. Champions still take a while to bring down, but 170% + slow + 10 hatred cost = you can maintain a lot of damage for a long time.

I use my primary, Evasive Fire, only when I run out of hatred or when I want the backflip to occur.

My build may not help with your playing style, but personally I use (as a level 59, well geared but not over the top):

My typical combo is (assume full hatred/discipline and the bat is out) to caltrop and drop a sentry, then run back a little and unload with rapid fire (to give you an idea, the damage + duration is enough for me to solo Nightmare Azmadon with a single rapid fire attack). If they are still alive or get past the caltrops, I'll drop another caltrops and move back (the sentry should still be in range and firing). Absolute worst case scenario, they get next to me, I smoke screen away. The hungering arrow + bat fills my hatred to full in <10 seconds, and the rapid fire lasts for ~15 seconds. The smoke screen allows for speedy escapes (great against frost/jail/etc), and the three perks result in significantly increased damage in almost any situation.

Personally I don't know why people like Chakram so much, on a side note.

It doesn't actually tell you but while it is active you are immune to damage, so it really helps kiting enemy's. I dropped trap and switched to smoke screen after normal mode, it just seemed more viable, but that's just my opinion, see for yourself.

Also, I use elemental arrow, with that lightening rune thing. It's cheap to spam and covers a longer range with a better AOE arc than chakram. I find you can kite with smoke screen and vault (can't remember name, not playing right now.)

The smoke screen and lingering fog is great, I used it since I unlocked the rune. Smoke screen not only makes your immune and invisible but it also breaks traps and freezes etc, it's just an awesome skill. Downside is the high Discipline cost, so I couple it with preparation and with a Battle Scars rune if, so if I ever find myself in a tight spot, I can vacate the area and get the health boost.

My primary is stun bolo shot since, if you can eliminate everyone in the mob but the champ, it stuns them continuously once you get it going. My secondary is either rapid fire with the web rune or elemental arrow with the ice rune.

Bat companion is a must for one of the four hot key slots which leaves one last slot for you to get creative, personally I like rain of vengeance with the beast bombs as it is extra damages without any cost to me. If you find yourself having trouble with bosses or are playing coop and don't need to worry as much about crowd control, impale is awesome for monsters and just swap over to chemical burn for bosses as it does massive damage and frees you up for movement.