Nepha-what now? What the hell is a Nephalem and why does everyone keep calling me that?

Nephalem Valor. Nephalem this. Nephalem that. All anyone ever seems to call me is Nephalem. My character seems to know what it means, as evidenced by her suspicion that she could not gain entrance to that sunken temple in Act I, which only Nephalem are supposed to be allowed into. I seem to recall a remark that 'all of the Nephalem were dead'.

And yet... I got into the temple. And everyone - I mean everyone in the Hells and the Heavens calls me Nephalem. So fine. I give up. I'm a Nephalem I guess. But, well, what the hell is a Nephalem anyway?

Nephalem are the children of mixed parentage - angels and demons who created and fled to Sanctuary to avoid the perpetual war between heaven and hell. "Sanctuary" is the primary place where the Diablo games take place, and all of the humans are descendants of these first Nephalem. True nephalem are able to tap into their supernatural powers. Not every "human" in Sanctuary can tap his or her supernatural powers, but the heroes in the Diablo series can.

The paper manual that comes with the boxed copy of the game has a bit of backstory/explanation: 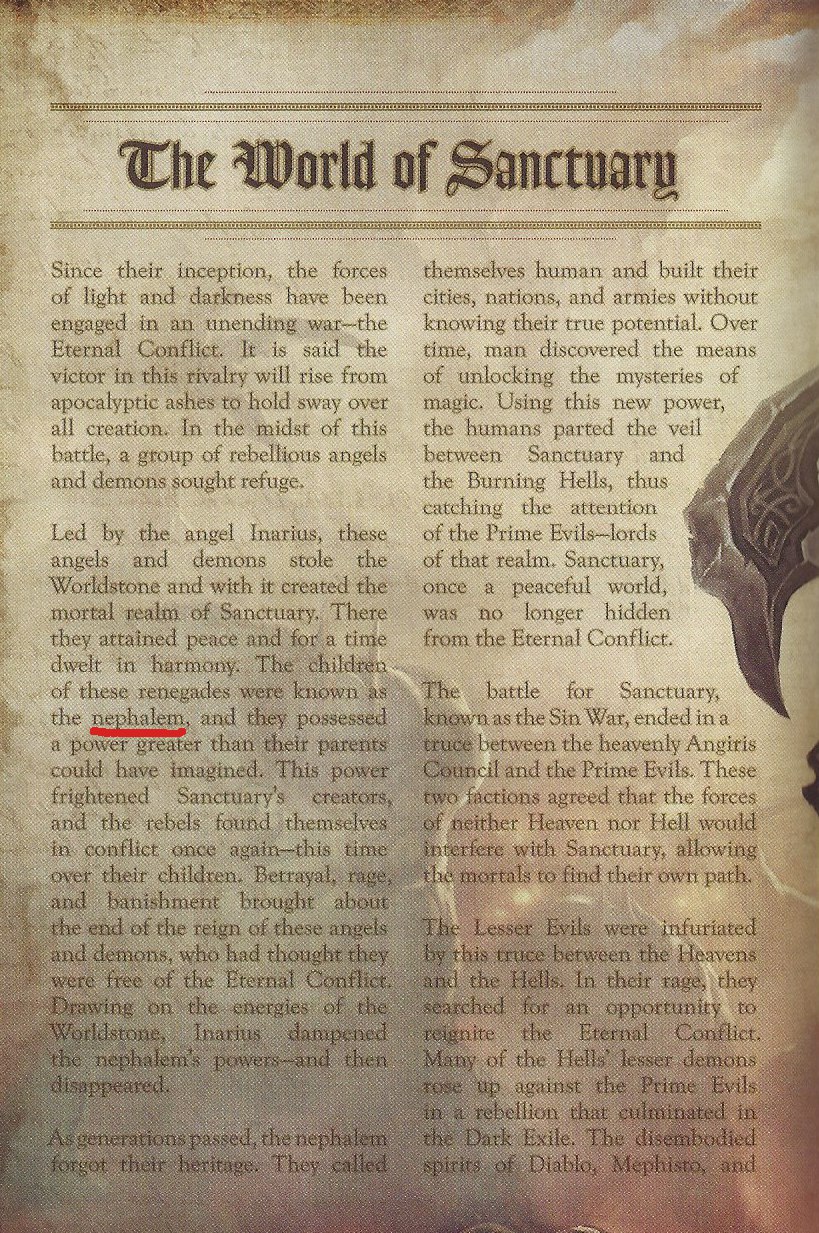 In the midst of this battle, a group of rebellious angels and demons sought refuge. [...] The children of these renegades were known as the nephalem, and they possessed a power greater than their parents could have imagined. [...] As generations passed, the nephalem forgot their heritage. They called themselves human and built their cities, nations, and armies without knowing their true potential.

(it's continued on another page, but it's unrelated to the current question.)

Tyrael explains this to you, if you ask him about "The Creation of the World" during Act 3, Machines of War:

The Creation of the World

Player: I would like to hear more of the creation of our world.

Tyrael: To escape the Eternal Conflict, a group of renegade angels and demons came together and created a hidden paradise for themselves. They called this world Sanctuary.

Eventually, they commingled. They gave birth to mankind. That is why you have both good and evil within you... and the power of both realms as your birthright.

The power of your nephalem ancestors was so terrifying to their parents that they tuned the Worldstone to weaken them. They knew they had loosed something... unimaginable upon creation.

Some additional lore is available in act 4.

After he gained a following, Inarius stole the sacred Worldstone and used it to create and conceal a world he called Sanctuary. Demons and angels alike fled there, and some of them—including Inarius and Lilith—fell in love. Many of these unions resulted in children. They were called the nephalem.

Inarius was alarmed when he realized that the nephalem had the potential to surpass both angels and demons in power. He wished to limit their abilities, but Lilith demanded that they become her army. Their escalating conflict led to Sanctuary's discovery by the demon lords and the Angiris Council.

Angels and demons are bound to their natures. Demons are given to chaos and deceit; angels to truth and order. [...] The nephalem alone have choice. [...] These creatures dwell outside the order... They cannot fathom the freedom they possess.

The Nephalem are the first generation of humans on Sanctuary. They are also known as Sanctuary's Children in the Sin War books. The Nephalem are the direct offspring of angels and demons, with the potential to be even greater than both. It is believed that such beings as Bul-Kathos, Rathma, and Esu, to name a few, are the first Nephalem to be born, and that their children are the current barbarians, necromancers, and sorceresses whom we know today in the Diablo universe.

Due to the Worldstone, the Nephalem's power has been slowly drained with each generation, therefore making any new offspring weaker and weaker. This was thwarted by the hero Uldyssian, who changed the essence of the Worldstone, allowing the Nephalem to tap into their powers. This is why the current Barbarians, Wizards, Demon Hunters, Monks, and Witch Doctors can tap into their powers. With the Worldstone destroyed though, no one yet knows how its disappearance may affect the warriors of the land.

And of course our heroes from Diablo 3.

Nephalems are the children of the angel and demon who created the sanctuary. Basically they are the humans in the Sanctuary. Also Nephalems are very powerful becasue they were birthed from and Angel and a Demon.

"The Sanctuary was created by an Angel (Inarius) and his demon lover. The humans that inhabit it are basically their children (also known as Nephalem). In terms of powers, the worlds are controlled by basically a council of Angels and a council of Demons. Personally, I would assume that Heaven and Hell work much like the world does today. There is a specific being that rules that domain (presidents, dictators, queens) and there are several domains(countries). Each is ruled separately by their own methods. One can also argue that there is a God in our real world, but that is a completely different can of worms. As for Diablo, no God is ever mentioned in the lore.

Any "God" figures that happen to be worshipped by the Nephalem (or humans) are assumed to be real people who did exist but didn't necessarily have godlike powers.

Also for a little side-lore which can be gathered by reading Diablo literature or also this site: The Sanctuary was created as a place where Angels and Demons could live in harmony and escape all of the constant fighting. It was intended to be just that: A Sanctuary. Unfortunately Diablo had other plans for the world. The Worldstone was the entity that was used to hide The Sanctuary from Heaven and Hell. " - Taken from here.

Outside of game lore, Nephilim (spelling varies) is a term from the Old Testament, meaning a Giant, a Warrior, and a Supernatural Being. One possible meaning for the biblical term is the hybrid produced by the interbreeding of angels and humans, which is similar to the in-game idea of angels and demons. Perhaps this means... humans are the demons. Or perhaps it was just chosen as a cool word with ancient origins.

They are based off this. And most of them were not good. In real life, the Sons of God went in unto the daughters of men, and they created a race of giants. The nephilim were so corrupt that it was part of the reason for Noah's flood, possibly. We know they were all destroyed in the world wide flood.

"Nephalim" in the bible spelled that way. They are considered to be famous heroes/warriors. That is Genesis 6:4

Word nephalim is hebrew wich means fallen, so actually it refers to those fallen angels or sons of God who went in unto the daughters of men. So in Diablo 3 i think its just cool word to be used as every else in that game. ^^

31
How does the Nephalem Valor buff work?
12
Is there a god?

31
How does the Nephalem Valor buff work?
17
Where is Development Hell and the unburied Jay Wilson?
1
Does the Nephalem Valor buff affect the whole group (regardless of level)?
8
Why does Imperius hate the Nephalem?
1
Is it worth doing Whimsyshire in Hell to get upgrades for Inferno
2
What is the purpose of a "Hell bringer"?
11
What are the hidden effects of the nephalem valor buff?
10
What is the point of Nephalem Rifts?
18
What are Greater Nephalem Rifts and how do they work?