How does Wrath of the Lamb change the Binding of Isaac?

I'm evaluating whether or not I should get this rather cheap DLC and I've boiled it down to the two following questions. I'll draw the conclusions myself.

I will explain everything it adds, so I can back up my conclusion.

There are a lot of things added to the game with it. The ones not really contributing to the difficulty are the Achievements and the Challenges, so I will not cover them.

There will be spoilers in this answer, so if you want to learn about everything yourself, do not read anything below this.

All of these are linked to either a new item, trinket, or boss.

The new harder alternate floors do make the game more difficult. Overall, the alternates have harder variants of enemies compared to the Pre-WL versions. The hardest implement is probably the Cellar, with the addition of insane spider based enemies, which can ruin any new player's day.

The amount of new enemies is staggering, so I won't be able to go over all of them. I will go over some of the important ones though.

There are many new bosses added to the game, many which are "dead" versions of the boss it is based off of.

The new bosses are:

Along with all of those, the 7 Deadly Sins got an upgraded form. They all get a Super variant, which has upgraded abilities.

The four new obstacles appear in rooms and can either help or harm the player.

The curses added to the game do make the game harder.

Trinkets: These passive items take up their own spot. They all have an effect (some better than others) and can only get removed if a new one is picked up.

The change in difficulty though, is more opinion and experience based than anything. A new person, who only played a couple runs on both, would more than likely say that Wrath of the Lamb is a harder version, while a more experienced player would get used to it pretty fast. But, besides that, there is no way to get around the fact that harder enemies and bosses were added, along with a harder ending and harder floors (and even curses to mix everything up). And, seeing that not all of the new items are good, and a couple of the trinkets can ruin a run by themselves (looking at you, Cursed-Skull), Wrath of the Lamb makes the game harder. Having said that, it can be a New Game Plus for those who "completed" the first game, but a new player could start on it and it would not be that different (besides more difficulty). The difficulty spike is not too high, and the learning curve to get used to the changes is very smooth, so anyone could get into it without having to master the first game.

And, for your question if it is forever or not:

Recently, Steam will tell you what DLC you have downloaded, and if you want to de-activate it or not. You will keep anything that was unlocked without the DLC, and if you unlock a Wrath of the Lamb thing, then un-install it, you will keep it unlocked (when you re-install it). You do not loose progress if you switch between versions.

I tested the above out myself.

I have the DLC for the PC, and at startup, the game was different. I believe the DLC is active from the time that you buy it, there is no option to turn it "on" or "off", at least not from what I saw.

And in my opinion, the DLC makes the game significantly harder, but in a random way, if that makes any sense. It all depends on which levels you end up with — if you end up with the regular Isaac levels (basement, caves, depths, womb), then the difficulty will be changed somewhat by the appearance of the newer enemies or bosses. So in that case, it will be ramped up a bit. However, if you end up entering one of the newer, "alternate" stages (cellar, catacombs, necropolis, utero), the random challenges and more difficult level layouts, paired with the possibility of two bosses in one level, as well as the more frequent new enemy/boss encounters, will make for an incredibly ramped up difficulty of play.

Hope my explanation helped, I for one have only played through the new DLC three times, and saw two seperate walkthroughts for it, so that's what I've gathered from what I've seen.

I've also recently purchased the DLC, and unlike certain games where you end up with two entries in your Steam library, once you download Wrath of the Lamb the old games executable is overwritten, so there's no playing the game without the DLC. 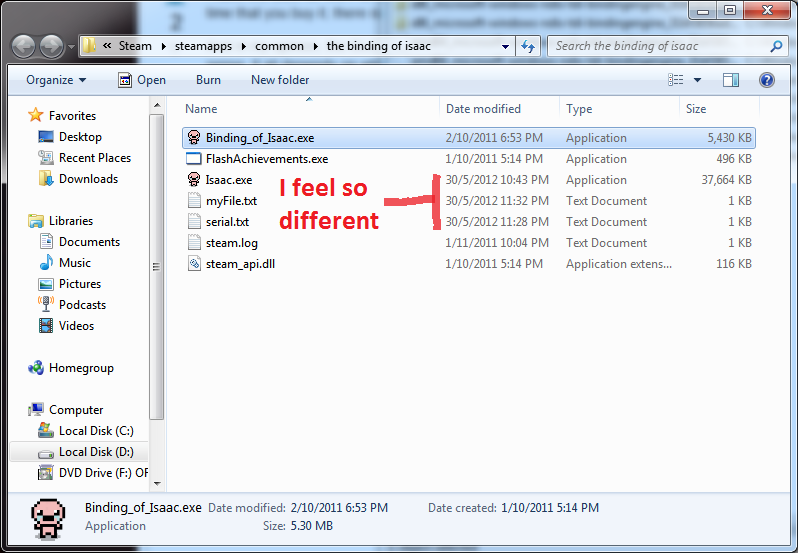 Difficulty wise, I'd say the game is definitely harder, for several reasons:

Not the answer you're looking for? Browse other questions tagged the-binding-of-isaac wrath-of-the-lamb or ask your own question.

2
How is Sword of the Stars: Gold Edition DLC different from the “regular” one?