How do I extract the music from the game files?

I love the Starcraft 2 music. Is there any way to extract it from the game files? From there, I can probably transcode it if necessary.

Blizzard games typically store all the data in mpq file(s), and StarCraft 2 is no exception. I believe the music files are stored there as well, though I don't know in which format. There are a few tools around for opening the mpq files - here's an example editor. Keep in mind that if you do find some way to extract the music from the game and transcode it to some convenient format, I'm guessing sharing it could be considered a copyright violation; and I wouldn't be surprised if just extracting any data from it is against some Blizzard policy.

You don't actually have to manually extract the music, however - the StarCraft 2 collector's edition includes a soundtrack CD, which you can also buy independently (here's one offered in Amazon, and Ivo posted a link to iTunes where it's much cheaper).

There's a soundtrack you can buy ;-) 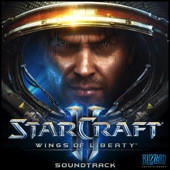 I did use the windows MPQ Editor to extract the jukebox music, which is in ogg format. I'm running this under Macosx with WineBottler.

Gotta love Zerg, Shotgun, and you. By the way, Whiteboy James and the Blues Express have a faster version. Somehow I still prefer the jukebox version.

46
Is there a way to see Minecraft's source code?

20
How do I change the video settings from outside Starcraft 2?
8
How can I view a live Starcraft II match in-game?
3
How long does the vision from a scan last in Starcraft 2
6
Transfer SC2 Installation from Mac OSX to PC
2
Replays freeze/don't work after upgrading to Windows 8!
6
Are there guides on how to build arcade games for StarCraft 2?
2
What is the fastest way to reinstall StarCraft 2?