A friend of mine just got borderlands GOTY, and its been crashing right from the start. Looked around and havnt found much, even in way of "things to try" so thus have asked here.

The game's splash screen comes up, and then it just crashs with the error "Failed to enter MenuMap: Failed to load package 'MenuMap' Please check log for errors" followed by a heck lot of normal error stuff (such as Address = 0x355ac850 (filename not found) GetOutermost() Address 0x75006e ect)

However the error code (after "load package 'MenuMap') seems to scream "I cant find borderlands.exe". (Has a lot of "Cant find file Borderlands.exe")

Does anyone have any useful info about this error, and ways to fix it?

The game works fine on my PC, but not for my friend, and I've even tried running his borderlands files on my pc, and it works fine, however my files will still give the error for him.

Thanks (I'll post screenshots later when I have the chance)

P.S.S we have tried the following: 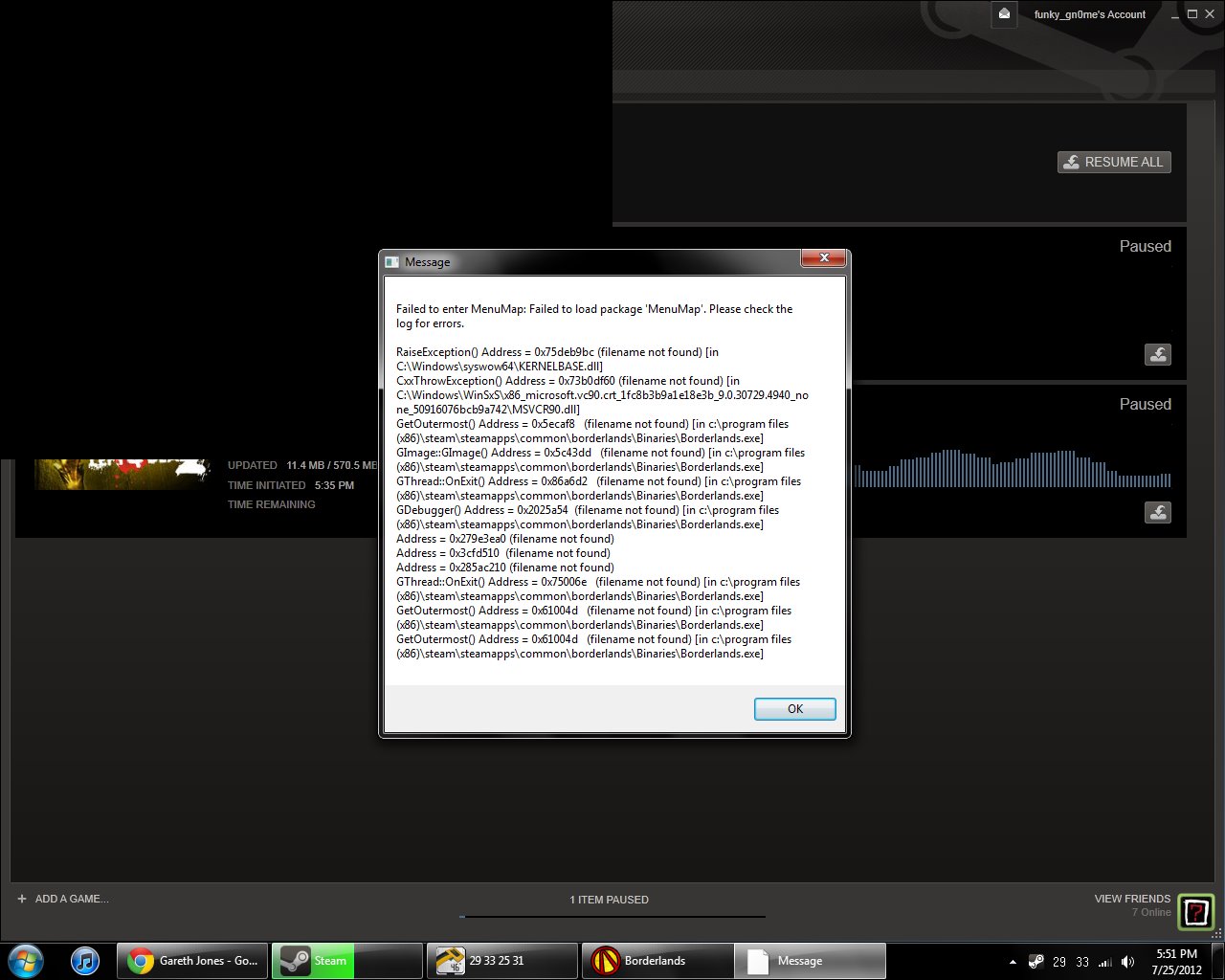 You might try some of these (I would try Gvaz's fix before a full wipe), or this fix. Hopefully you get it fixed!

You could also try renaming nvcpl.dll in the Borderlands\binaries folder, think I saw that on Reddit a bit back.

Edit: In case threads go down, here are suggested fixes:

After trying everything i mentioned a few times and other semi-fix attempts i decided to nuke and pave. With a fresh install of windows and 1.40 borderlands works. It seems for one reason or another the patch and/or something working together on my previous install may have corrupted/screwed up one of the two dlls that borderlands error is complaining about (i replaced the first one, couldnt replace the second one as it was write protected).

Going through your screenshot image shows two initial problems with Windows and then the rest (Boarderlands.exe) errors are probably an extension of the windows errors since the game can clearly launch before crashing.

The KERNELBASE.DLL is a system file. What you can do is try to make sure that the file is not corrupted. You can find instructions here off the Microsoft Website.

You can also make sure that your .NET frameworks are all up to date. If they are not, you can obtain the standalone installer for .NET 4 here and .NET 3.5 here.

The MSVCR90.DLL error is tied to a Visual C++ Library (which you have identified), but just to be sure, you can get the official download here.

If those are up to date and your graphic drivers are all up to date as well what you can try doing is creating a shortcut for the game on your desktop and running it in compatibility mode on Windows XP SP3.

0
Has Borderlands recently made it so you can't change Field of View?
7
What is the ideal play through path for the GOTY Edition of Borderlands?
12
What is the difference between borderlands and borderlands GOTY edition?
3
Can I exchange my character for another one of a similar level?
4
Borderlands 1 crashing on steam multiplayer