Is the Bio Farm more productive than a regular farm, for a particular crop?

In the Modern Times DLC for Tropico 4, your regular Farms get replaced by Bio Farms. These Bio Farms have three work modes: corn, food crops, and cash crops. The latter two modes will grow multiple crops at the same time: food crops will do bananas, papayas, and pineapples, while cash crops will grow tobacco, coffee, and sugar. (The Bio Farm also generates some corn if it's in the food or cash mode.) Regular farms, of course, only grow one crop type at a time.

The trouble is that the preferred crop conditions for various crops are directly contradictory. For instance, sugar likes low altitudes and high humidity, and tobacco likes exactly the opposite: high altitudes and low humidity.

Given that a Bio Farm generates so many things, does it generate less of any particular crop? If I have a Rum Distillery that I keep supplied with two sugar farms, do I need two Bio Farms to keep it supplied, or do I need three (or more) Bio Farms growing cash crops? Is the Bio Farm's production of a particular crop reduced because it produces other crops in addition? (Even though those other crops may be in terrible growing conditions where it's not worth spending the effort to raise them?)

Bonus question: how does the productivity of Bio Farms compare to Plantations, when growing a particular cash crop?

And now, SCIENCE! A ten-year experiment to determine whether bio farms are better than farms, for a particular crop. I chose Tobacco for this experiment, because I had to measure the Bio Farm via exports rather than just looking at its production directly.

Bio Farms show up at 1967, so I found a challenge that started in 1965, built a farm, and then built the bio farm when it showed up later. (The crop quality was uniform when I started this experiment; this image is from a few years in.) 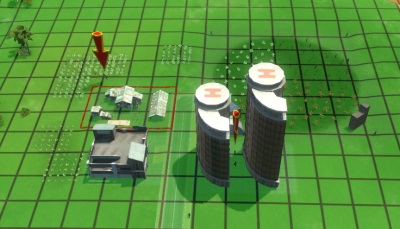 I then set the wages to 1, made sure all of my citizens had a job, and imported a bunch of foreign experts. Then I raised the wages to 25 so none of them would look for a better job.

If you're curious, the other crop conditions for the bio farm: coffee was a pale green, corn was yellow, and sugar was orange. Tobacco, of course, was a deep green.

There were no problems with transportation during the experiment; the teamsters did their jobs.

The farm produced 6769 tobacco, and the bio farm produced 11578 goods. (This is, of course, horribly inaccurate; either number could be off by 500+ if I ran this experiment again.)

The farm produced 35% more tobacco than the bio farm, but it also had more skilled farmers. In all likelihood, the production of a bio farm is very close to the production of four farms producing different crops.

Also, a bio farm does not degrade the soil, but a normal farm does. I demolished the farms when I was done with the experiment, so you can see how the soil fertility for tobacco was degraded by the farm. 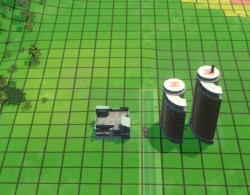 Given that the productivity is fairly similar, but the normal farm degrades the soil, I highly recommend bio farms as more productive over the long haul.

I can use a single plantation to feed a rum distillery with enough sugar to keep it running, and still have sugar to export. A single biofarm can't do that. The short answer is: If you're in it for the long haul, biofarms are probably the best bet because of the soil quality issue; but if you're just trying to make a lot of money fast, plantations are best (it'd take 3 or 4 biofarms to put out the same sugar as a single sugar plantation, but they'd also produce other cash crops). The only downside to biofarms is that they take up more space than plantations, and their crop production cycles... so they aren't producing each cash crop all the time. It will produce some coffee, then some tobacco, then some sugar, and start the cycle over again. If you want a more steady supply, you need a plantation. You may be able to build multiple biofarms and somehow stagger them, but I can't be sure.

Not the answer you're looking for? Browse other questions tagged tropico-4 or ask your own question.

13
How much more productive are Plantations than Farms?
10
How should I structure my city in order to make up for the teamster's terrible AI?