What Science can I perform on and near Kerbin?

I've decided to try the Career mode in Kerbal Space Program and I've flown a few rockets into orbit around Kerbin and landed them safely again. I've taken some mystery goo into orbit and I've taken surface samples from a few biomes on Kerbin.

But I'm now at a point where I seem to repeat myself in missions and hardly gain any Science anymore. And even if I figured out how to reach Mun or Minmus and get back again, I'm missing a few parts that are probably important for that such as landing gear and solar cells.

So my goal right now is to do some more Science on Kerbin to unlock those parts before I venture on more exciting and dangerous missions.

Here is a screenshort of my Science Archives to roughly show what I have already done: 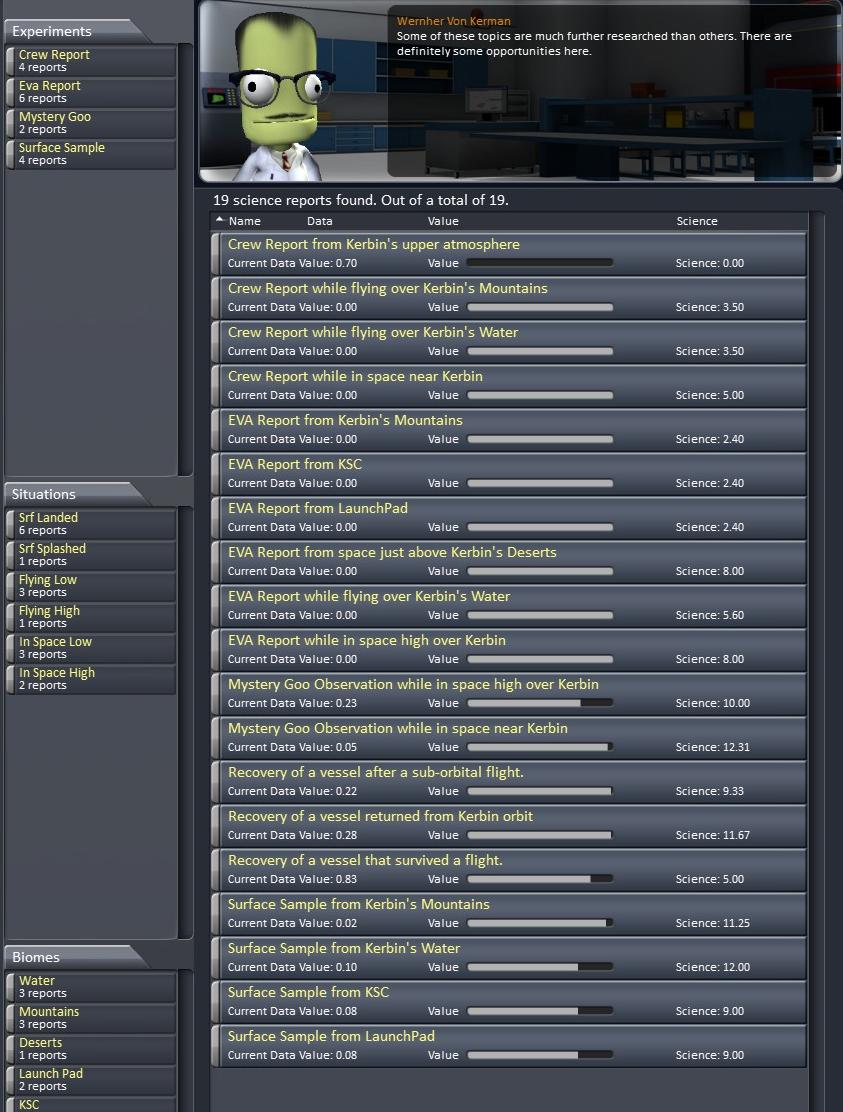 In Kerbal Space Program, Science depends on the location and the type of experiment.

In detail, for Kerbin, this makes five altitude corridors (with some caveats):

On top of that, Kerbin knows various biomes:

Additionally, the Space Center also has various mini-biomes which return separate results, but only when on the ground (above ground, the whole space center counts as "Shores"):

Depending on the experiment, some of these altitude corridors have per-biome results, others only have one result for the entire corridor.

The EVA Report is biome-dependant on the surface, in the lower atmosphere and in near space; it is global everywhere else.

The Crew Report is biome-dependant on the surface and in the lower atmosphere; it is global everywhere else.

The Mystery Goo Observation (available through the Mystery Goo™ Containment Unit from the Basic Rocketry tech node) is biome-dependant on the surface; it is global everywhere else.

There can only be one crew report per part that produces a crew report (that is, per capsule), which is stored in the part. It can be transmitted, in which case it makes space for a new crew report.

Both the EVA report and the Surface Sample experiments can be stored in the capsule as well, with each combination of altitude corridor and biome once. So, you can store a surface sample from every biome, and EVA reports from every biome all at once.

Results can either be recovered by landing the craft on Kerbin and then recovering it from the Tracking Station (or from the craft view, where it's hidden at the top of the screen), or by transmitting them home.

Transmission is hardly effective this early into the tech tree - you lack the electricity to send the results back. Nevertheless, you can - for example - send back one crew report to make space for another, so here's some information about transmission as well:

Every experiment has a transmission efficiency, which reduces the Science yield on transmission (as opposed to recovery).

In the case of the Surface Sample this is 25%, which makes them an undesirable candidate for transmission.

Similarly, the Mystery Goo Observation has only 30% efficiency.

10
What altitude do I need to be to register as being above a biome?
8
Can I get science from asteroids?

4
When should I start a trans-munar or trans-minmus injection burn?
5
Do I need to bring my scientific instruments back from the Mun?
6
Kraken ate Jebediah - any way to resurrect him?
8
Getting to Gilly and back
10
How can I get science from my space station to cash in the points?
8
Can I salvage my KSP career with a single launch
3
How can I make money in the new career mode?
2
Maintaining control during probe atmospheric landing with RemoteTech
4
How to "Investigate rock arches on the Mun" in Kerbal Space Program?
3
Can you only get the same science once?