How do I create a wing if I got no friends in Elite: Dangerous?

I have read that I can invite other captains to join and create a wing, even NPC pilots but I don't find such option.

You can invite any player to a wing that you can communicate with. That means friends list (when they're online), or anybody within local comms range.

If you look in your comms panel (upper left), and in the "person" tab, you can select somebody to talk directly to them, and that includes an option to invite them to a wing.

Note also, that if you target somebody, and can scan them (they're in front of you for a little bit), you'll see if they're already in a wing.

You'll want to talk to people to negotiate the wing thing. If there's a big community goal or something going on, you can go to the location where players doing that need to be (station, combat zone, resource extraction site, whatever), you can often just say something in local about wanting to wing up. You can also find players that are in a wing of 2 or 3 and see if they want another wing member.

Default keybinding to get into the comms panel is 2. Then Q and E to switch tabs, WASD to navigate around inside a tab, Space to activate/select something, and Esc to go back.

When you're talking to somebody, it will be in the chat bubble tab of the comms window. You can use "/r" to reply directly to the last person that talked to you directly, "/t" to directly communicate with the ship you have targeted, "/l" to broadcast a message in local space, and "/w" to talk to your wing.

Here's what the comms panel looks like when I have a local player selected (if I target the player and they're in front of me, their ship types would be replaced with their in-game name): 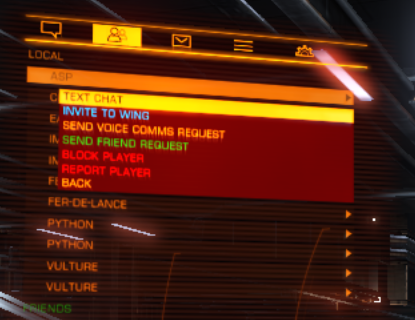