As terran, what are the most common techniques to block off the entrance ramp to your base?

There are many different arrangements of structures or units that can be used to block off the entrance to a base to prevent a zealot push or zergling rush. The obvious answer is barracks and a supply depot, but I've also seen people barricade their entrance ramps with all supply depots, or with bunkers.

If barracks are being used, the direction of the ramp and other factors makes a difference, since placing the barracks in the wrong place can prevent you from building add-ons later on.

What are the most common techniques used for positioning an early-game terran ramp barricade, and how does the ramp direction (or cliff edge) and the information you get from scouting influence it?

You would build your first depot in the corner then your bunker in the middle and your second depot on the other corner like so: 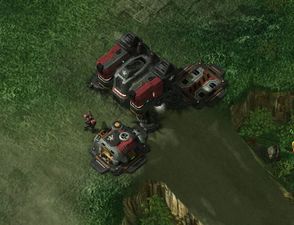 This is the most typical wall off because it is the fastest. If your enemy is doing a super early attack such as a 6 pool you can have it up in time with only minor cutting of workers (based off your scouting info).

Later game you can then move your barracks to a more central location if you wish or if the ramp placement prevents add ons. If you wish to maintain the wall off you can easily replace it with another depot.

If you suspect there will be an early one base push you can move the rax to build a bunker in it's place, this will make you safe from most attacks with a few scvs repairing behind.

This kind of wall off is the most commonly used simply because it's the fastest standard way to get one down. In most cases it will be fine to do this in every game. However note that it is less likely to be useful against Terran and Protoss as a wall off to them provides them with a safe way to poke at your buildings. So if your apm isn't high enough to handle ramp harass on your wall off I would suggest you don't do it against Protoss and Terran.

I assume you're talking about the first ramp wall and not the B2 wall.

The wall depends on two things : the ennemy BO and the map. Depending on the starting spot (especially with new maps) the ramp is more or less wide, which is why some ramp with only supply depots or add one or two barracks.

if you scout ennemy strategy, different walls are possible (for high level plays of course, under diamond / top plat you can wall your first base with two supply and a barrack almost all the time).

You might want to wall with a bunker if the ennemy goes for a all in.

Check this link if you want infos about walling, it is quite easy to understand but there is eveything you need :
http://wiki.teamliquid.net/starcraft2/Walling

15
StarCraft 2 Glossary of Terms
23
Dealing with the dreaded Terran Base Race
9
What are the Terran and Zerg equivalents of 4warpgate?
12
As Terran, what techniques effectively harass in the early game (before 6 minutes)
13
Why do some players build their buildings in a line (towards the entrance of their base)?
10
How to deal with 2v2 rushes?
4
How do I improve my One Base Battlecruiser Build
5
When should wall off my Terran base and when should I not?
1
Starcraft 2: Defending against proxy 2-rax (and early aggression in general) as Terran
4
Best Attacks Against Bunker Early Game StarCraft 2?