Why is it raining only over generated bodies of water?

On Minecraft I notice that it rains only over water (links to YouTube video showing the issue better): 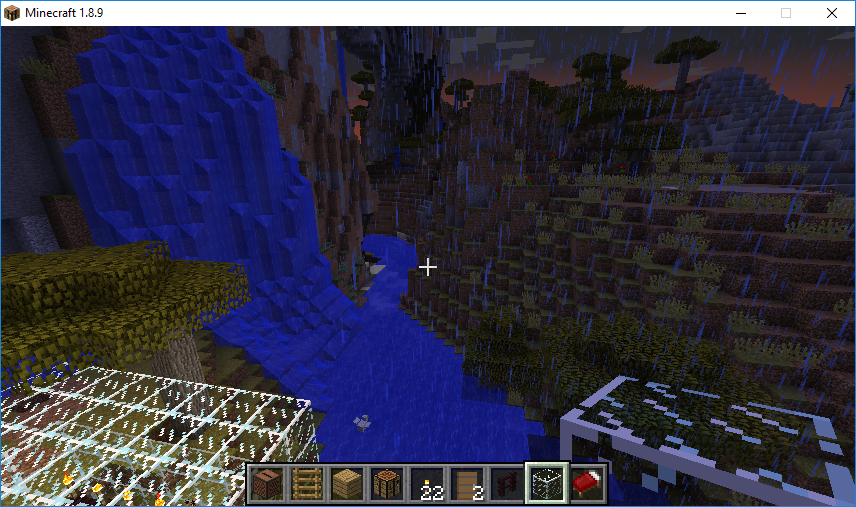 I haven't played Minecraft for a while: is this a recent change that I missed? I first noticed this on a server so I tried single-player, but however the issue persists.

I've tracked it down to generated bodies of water (e.g, not water that the player has put down or any part of the world that is modified where water flows), that is:

If I dig a large hole and fill it with water from a nearby natural water source (where the rain is falling), rain will not fall over the body of water I created.

Thinking that this was an issue with the GPU, I upgraded the GPU (small upgrade, but a huge difference and I needed the upgrade anyhow) but the problem persists. I've also tried reinstalling the game (I have not tried an earlier version (snapshot) of the game however, and I'll do that shortly) and that didn't work either.

I have this issue in the Savanna and Desert biomes, and I haven't tried another biome type.

It has to do with biomes, and is not in any way a bug;

Judging by the acacia trees, you are in a dry/warm biome (either a Savanna or Plateau). In these Biomes it doesn't rain or snow, it only becomes overcast.

But all the naturally generated bodies of water; like rivers, lakes, and oceans will rain, because they are separate (and not dry) biomes.

4
Minecraft FPS irregular in fullscreen, but reporting 35-45
1
Can't set up a local LAN server on Minecraft 12w25a?
2
What happened to my minecraft world?
2
Minecraft 1.9 Data Tags changed?
2
Why are end cities not generated in survival, though in creative they are?
1
Forced Drag and Drop to select items glitch
1
How to replace an item the player has in their inventory in 1.13?
7
How the snow/ice patches in mountain biomes are calculated?
8
Water stream push force too small