How to lock entire line of hoppers from below? 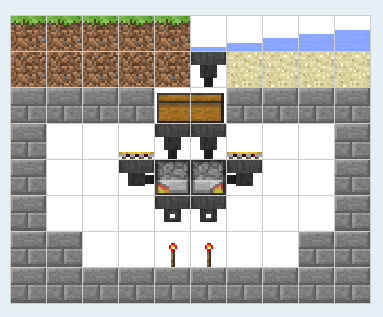 This is one (out of 15 identical) slice of the supersmelter-like XP farm I'm currently finishing, attached to a massive kelp farm. (the rails are drawn wrong direction; the schematics don't support rails "into/out of the screen")

The currently missing bit is how to automatically lock all the hoppers to collect XP. My current mode of operation is to manually place these redstone torches to lock the hoppers to be able to retrieve an item smelted, collect XP, then knock them out and stash in a chest for next use.

The walkways must remain free as they are (redstone dust or other 'intangible' extras are okay though), as sometimes junk will fall into one feed system or another and needs to be removed and they provide just enough access to the lower part of the furnaces to be able to grab some XP. The area below is completely unoccupied though, and a free game.

How can I toggle a whole line of these bottom hoppers in all the slices with a single lever - power them from below?

Just remember that you need to consider the max range of redstone signals for this to work.

This is a little schematic I could do online to kinda show how it would look. Consider Gold as hoppers, tnt as repeaters and mushrooms as redstone 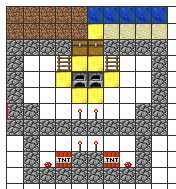 10
How do you power consecutive blocks from below to make a large hatch?
5
How do Minecart with Hoppers work?
4
How to power a row of droppers efficiently from side or bottom?
11
How can you activate a piston array from below?
1
How do I keep my hoppers from filling up when chests are full?
5
Why is my mob farm not allowing me to grab XP orbs in Minecraft? How can I fix it?
3
Spawn-proofing the nether-top sheep farm
4
How to power a dispenser without powering a hopper below?