Are there raid farms that let the player kill ravagers?

I am looking to build a raid farm in Java edition 1.17. Vanilla, no autoclick or similar.

Are there designs that allow the player to kill the ravagers? Or all designs use lava/suffocation because ravagers take "too much" time to kill?

As a bonus side-question, I see a lot of them are "stacking " or "non stacking", what's the difference?

No - because, why? Ravagers drop saddles even when killed by lava, so small non-stacking "hole in the ground" farms produce a lot of saddles regardless. And a good stacking farm produces so much XP it must be burned in lava not to crash the server, even without ravagers, so there's no significant benefit to keeping them around for player kill.

And the "too much time" factor isn't a mere convenience matter. As technical players progress up in experience, the thought "What kind of glitch or exploit is there to crash the server" gives way to "How can I have my contraption still run and produce, and NOT crash the server in the process." And good stacking raid farms are totally on that end of the spectrum. An error at operating one will crash the server.

In particular, ravagers are huge, and would necessitate a kill chamber big enough your single hit with sweeping edge wouldn't cover it whole. A witch survives in a corner, throws a potion of healing at a group of mobs, including several witches, they can survive your hit now, and more mobs (including witches) are accumulating - and soon your server crashes due to too many entities and too heavy lag. Killing all mobs quickly isn't just a matter of efficiency and convenience, it's a necessity; stacking raid farms are insane builds that operate on the brink of server's ability to perform, and an error in operating one can easily crash the server.

As for your bonus side-question:

In a non-stacking raid farm you get bad omen, trigger a raid, illagers arrive wave by wave as normal, you kill the last wave, the raid ends, you lose Bad Omen and get Hero of the Village. It's the regular intended mechanics, except through the right build you kill all the mobs easily without risk. To repeat a cycle you must find and kill a patrol leader again.

A stacking raid farm uses a tricky mechanics of assembling/destroying what constitutes village center, to repeatedly start new raids, before old ones finish - to put it lightly. In fact new raids - all comprising of as many waves as a normal raid - are started up to several times per second. That results in an absolute deluge of raid mobs, your every swing of the sword killing dozens - even after filtering off all the ravagers.

It's rather hard to imagine the scale, but let me post the effects of a minor error in building the farm: the ravager killing chamber was built too small; not all ravagers would burn up to death, a small percent was simply pushed out of the chamber, through its glass walls, by the massive crowd of burning ravagers inside. The farm operated for maybe five minutes, then someone crossed over to the Nether side, to find this: 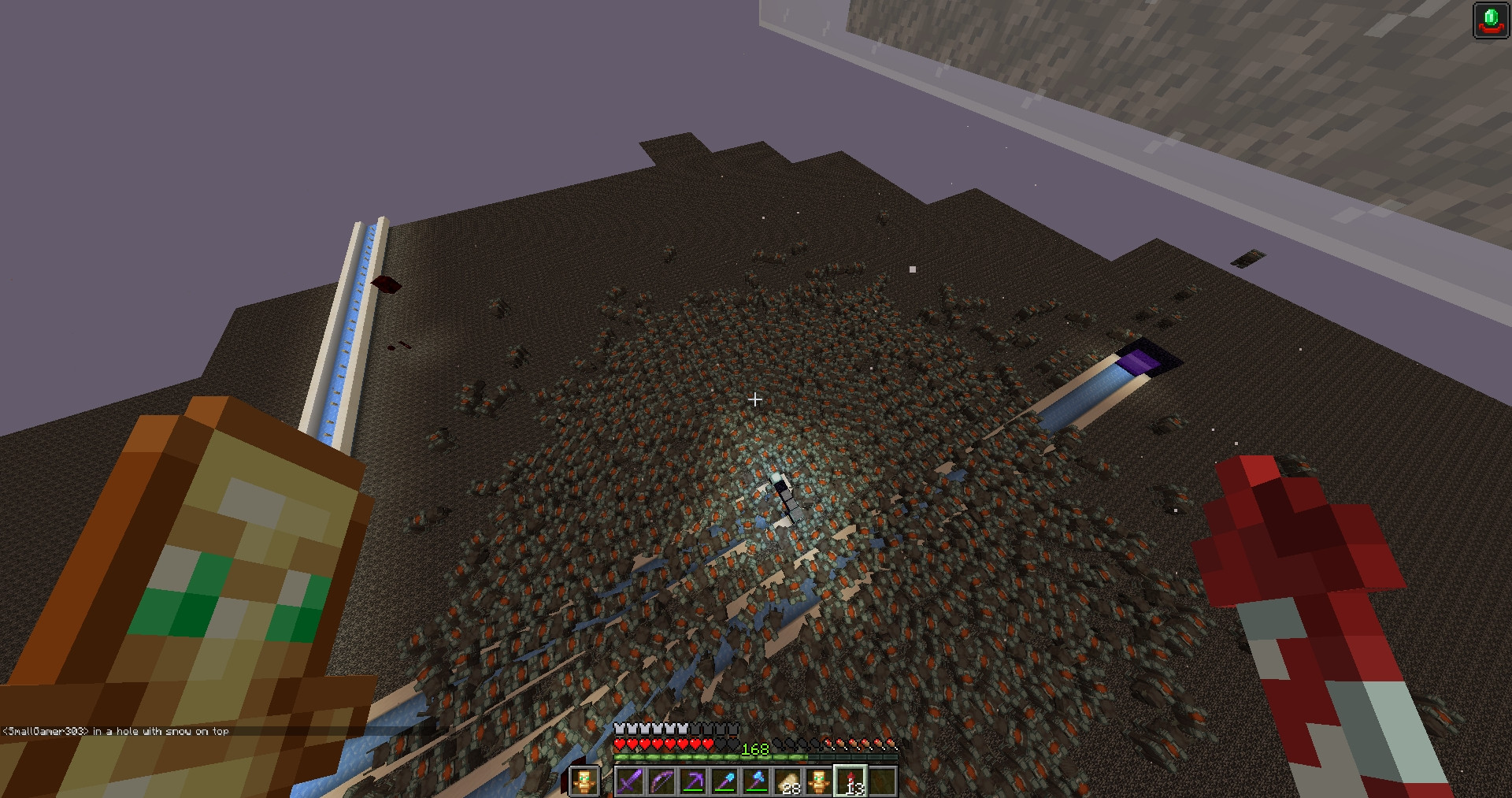 1
How to defeat a raid easily

6
What are some designs for "safe" melon farms?
2
Consistently Unable To Connect To Minecraft (Login, Local LAN Server)
14
Minecraft EXCEPTION ACCESS VIOLATION
0
How to let player breathe underwater
4
Minecraft strange screen spliting behavior of display
8
Is there a relatively easy and efficient way to spawnproof large areas in the Nether?
0
Changing player heads size that are on the ground
8
Traps for Vigilant Players?
0
Is there a way to effectively prevent phantoms from spawning (1.14)?
2
List of all Minecraft crafting recipes for crafting web