Is it possible to get 100% fire resistance?

There is a maximum for Max Resistance at 95%:

A character's default maximum resistance value is 75%, although certain Unique Items and the Paladin's Resistance Aura synergies can raise that number as high as 95%, the cap for resistances. Therefore, a character can never become totally immune to elemental attacks with resistance alone.

The second way to reduce elemental damage - Absortion - is calculated after resistance. It could be both % based and integer number based:

Example: A player with Raven Frost and 75% Cold Resistance takes 400 hit points of cold damage. The 75% resistance takes the damage down to 100 HP. The Cold Absorb takes 20% of that figure off, leaving 80 HP, and then those 20 HP are converted to healing, leaving a final damage of just 60 HP.

It's worth noting that there are monsters with Conviction Aura, which reduces player resistances, it could be very dangerous. The aura looks like this: 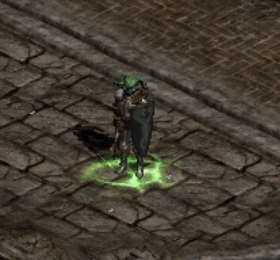 As for fighting Diablo, not all of his attacks are Fire, the most iconic fire cone from his hands is actually Lightning. All of his elemental attacks:

Not the answer you're looking for? Browse other questions tagged diablo-2 diablo-2-resurrected or ask your own question.

11
How do you recover socketed gems/runes from an item?
11
Is it realistically possible to play Diablo 2 LOD on Hell difficulty using a necromancer with all points in summoning?
15
What does the "Chat Gem" do in battle.net?
6
What is the cow level and how do I get there?
4
In what order should I take levels in Holy Fire and its synergies to maximize damage?
1
What's a good usually SOLO character build for Diablo II Ladder? Specifically for MFing
3
How does elemental damage in weapons work in Diablo II?
6
How to craft blood and hitpower gloves efficiently in Diablo II?