Why do some heroes fit some lanes better than others?

What makes some heroes work better in a certain lane than any other? I've heard in some casts where the commentator predicts which lanes which heroes will pick even before the game has started.

I'm especially confused that some heroes appear to work better in one of the side lanes, rather than the other. The only differences are the position of the shop relative to the towers, and the towers are a bit asymmetrically placed too.

For a solo lane, you want a hero that's somewhat level dependent, as they'll be getting a lot of experience. This could be someone like an Invoker, Leshrac, or Night Stalker. If this lane is solo mid, ideally they'll also be able to utilize runes well to gank, because they'll have the easiest access to them.

As yx. sort of pointed out, it's much harder to gank through the opponent's jungle than through your own, making the "safe" or "short" lane the one alongside your own jungle. This is typically where a hard carry hero who needs a LOT of items like Anti-Mage or Faceless Void will lane. However, melee heroes in lane are subject to a lot of harass so they'll almost definitely be paired with one or two support heroes like a Dazzle or Crystal Maiden, who will earn a small bit of gold for themselves and maintain lane equilibrium by pulling neutral creeps.

Conversely, the "offlane" or "long" lane is often against multiple opponents and is easy to gank, so you'll want someone there who has a natural escape mechanism ability, like a Windrunner, Puck, Dark Seer, or Mirana, all of whom can be productive just with levels and not much gold, which is exactly what they're likely to be getting in a "suicide" solo lane.

A hard carry is a hero who in lategame with a decent amount of items will be able to deal large amounts of auto-attack damage quickly. They usually have abilities that will make an item on them stronger than the same item on another hero. For example: Gyrocoptor's Flak Cannon, Juggernaut's Critical Strike, and Weaver's Geminate Attack all grant extra damage. These heroes usually have large AGI growth per level or are AGI heroes, which allows them to gain high attack damage, attack speed, and armor from the same attribute.

Some hard carries are also increasingly powerful into the game because they are able to farm at far faster speeds than other carries can match. They have good base stats and/or good mobility and thus can hit a "lategame damage" stage faster than typical carries. Some examples include Anti-Mage, Shadowfiend, and Naga Siren. In addition, there are some unusual hard carry heroes like Spectre, Morphling, and Obsidian Destroyer are able to do so through unorthodox abiltiies. I wouldn't worry too much about that.

The terms aren't very uniform, but "soft carry" or "semi carry" usually refers to heroes that do better with items than the majority of heroes, but not as good as a hard carry. Examples of these might be Windrunner, Mirana, and Stormspirit. While they can potentially carry if they have a good enough early and midgame, with an equal amount of gold in items they are expected to be weaker than a hard carry. They make up for this by having a stronger laning phase/earlygame and having stronger abilities.

Finally, a term that's gaining more traction recently is "midgame carry" for heroes like Razor, Necrolyte, and Krobelus. These heroes deal a majority of damage from their abilities, not from their items, and so they peak in terms of effectiveness when these abilities are maxed, usually somewhere between levels 11 and 16. This is much earlier than a typical carry who just gets better and better as he gains levels. However, they are still fully capable of ending a game in this window of time if left unchecked.

There are some differences in the side lanes. In particular, each side has a lane that extends into the opponent's jungle and thus is more dangerous. In the following picture, you can see the point where the creeps meet up without outside influence. Notice that the creeps meet up very close to the dire tower on the top left and radiant tower on the bottom right. You can further cause the opponent to overextend by pulling from a camp (red arrow): 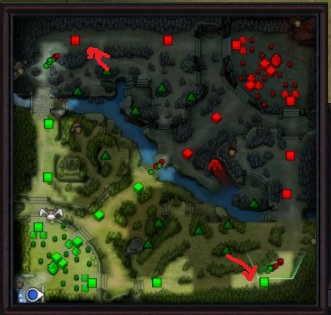 This makes one of the side lanes inherently more dangerous than the other, so ranged heroes and/or heroes with good escape mechanisms or improved vision should be placed there. For example, Venomancer would be a great choice to push the top lane for the radiant since he can place his wards in the dire jungle to spot ganks.

Conversely, you want heroes with good snare capabilities in the bottom lane to assist in ganks.

Well I main mid lane so let me explain how mid lane works and you can figure out how side lanes work by contrast.

Mid is for heroes who can take advantage of RUNES because runes spawn either in between mid/bot or mid/top.

A rune resets a bottle which total gives something like 405 life and 225 mana.

Wisp + anything is incredibly scary middle (mostly seen in serious business games) because Wisp's tether allows his hp/mana regen to effect his ally and essentially double the bottle resets. Many more vulnerable mids (SF, Storm, Invoker) absolutely cannot do anything but die to a CK + wisp that knows what they are doing for instance.

Runes are made for aggression. The mid hero(es), their job is normally to help the rest of their team win their lanes (99% of the time in unorganized play. More likely to have more customized plans in organized but this is boiler plate and it works fairly well).

Heroes that snowball either themselves or their teams are generally a good choice (Wisp snowballs his team extremely hard). For example, Earth Spirit is over powered (cannot contest his runes, his spells are extremely mana efficient) but better now after nerfs. He is a good mid. TA is extremely good mid because she starts 1 or 2 hit killing people if she gets ahead too much and has 0 down time because her traps are always up.

Lion is not as good because his spells are mana inefficient and his Finger has a lot of down time.

Storm is very good because he theoretically has 0 down time if the player is good enough with mana management/lucky with runes. Also his first item is an Orchid which is an extremely aggressive and powerful item before people have Linkens/BKB.

Puck is like a safer more AoE version of Storm.

Dragon Knight is actually not bad because he snowballs his team by forcing tower fights/slowly beating them to death. He is basically invulnerable against most of the cast for most of the game if he gets a large gold advantage since he buys hybrid defense/offense items like BKB, Halberd, Cuirass, Satanic.

Invoker used to be popular mid but he dies to everything at lv 1/2, has 280 base ms and can't contest/use runes well and needs too many levels to get useful. Most mids get much more useful at 6.

Shadow Shaman is not bad despite being mana inefficient. Many heroes can't prevent the mid tower from falling when he hits 6. He gets extremely scary if he can start taking towers and working towards his Aghanims early in the game.

Pudge is fun but somewhat risky. He runs slow for one thing and is useless if he can't land good hooks.

Tinker is often times better left alone in the jungle to quickly farm his BoT. Mirana is good if paired with a BANE for guaranteed 5 second arrows, so no solo. Same with heroes who can jungle safely like NP, Enigma, DS.

Map control heroes like NS and BS are actually usually better placed in a side lane since they often times can't effectively deal with bottle spam + nuke wave + get all the runes play that Puck/SF/DK/etc. can use against them. They're wasting the lane if they can't contest runes because they are always at tower.

Not the answer you're looking for? Browse other questions tagged dota-2 dota or ask your own question.

12
Why is the bottom lane called the safelane?
5
What makes a good mid-lane hero?
2
What's the difference between a carry and a half-carry?

2
Why do some of the item costs on the wiki show two numbers?
8
DotA 2 Barracks, Which is better to focus and why?
2
Why are dual-lanes mid so rarely seen?
47
What are some good heroes for a beginner?
4
Why is pure damage especially dangerous to strength heroes?
3
Overcoming a ceiling in skill level
5
When is the best time to activate Glyph of Fortification on T3 Buildings?
3
Looking for a specific type of dual lane
9
How to play against Bloodseeker in 6.84c?