How does item level and rarity affect the possible attributes?

Someone found this quiver with surprisingly high values, although I'm unable to find a level 30 rare quiver on d3db.com 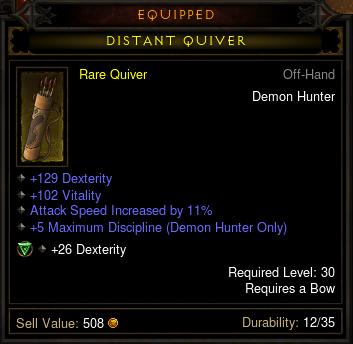 Given that the item's internal level (IIL) determines which affixes are possible, I'd like to know whether the IIL affects the minimum/maximum rolls for an attribute, a graph or table would be great.

For example, let's say items are able to get a pure +intellect affix from IIL 20, what's stopping you from rolling 250 at 20?

Is it a bell curve, which has shallower gradients with a higher IIL of the item?

Is it capped, dependant on IIL?

The requirement level is defined by the item and every item has an internal level number.

There is no list with items and their internal level numbers so I guess they are assigned randomly for every item.

But at least legendary items also have a total affix count and bonus affixes. Here is an example:

It rolled a Dex suffix, Vit suffix and a dex/vit prefix most likely. That's how the stats can stack to give some out of depth looking numbers is all.... you can roll up to 4 affixes that impact the same stat on a single rare... 3 combo prefixes that hit the same stat and one suffix that hits just one stat.

In practice its far simpler than D2. The base item level is determined by the mlvl monster and that ilvl maps to tiers of a particular affix. Almost all affixes have the same name but comprise several tiers... a stat single stat suffix will have several ilvl break points within it that's all. No normal dist, just ilvl straight to affix tier is the Max, lower can of course be selected.

Base ilvl in inferno seems determined by act, which may just be a function of constant mlvls through the acts...

1
How can I tell what are the maximum attribute values that are expected from the different item levels?

8
How do followers' attributes increase from item bonuses?
1
Does the Nephalem Valor buff affect the whole group (regardless of level)?
5
How does crit affect beam spells and DOTs?
0
As a Wizard, what weapons and item attributes are worth picking up?
9
How does the 'Item Budget' work?
3
Where does each item level and affix drop?
2
Item Level and their average armor/dps in Diablo 3
4
How do monster level and act number affect crowd control reduction?
7
Does Paragon level affect drop rate?