So Steam can now stream in-home. Does this only work with games tied to the Steam account, or can I play games added via the "Add non-Steam game" feature?

Example: If I have Star Wars: The Old Republic on my gaming rig added as a non-steam game, can I play that on a separate machine using the in-home streaming?

Yes. Also, games not added to steam. The basic method is to alt-tab to the desktop:

Once you get to the desktop, you can browse, run other programs. watch movies...

Yes, you can stream games added as non-Steam games. There is no guarantee that they will work properly, but I've done it with a number of games successfully.

You can also stream non-game programs, and if you can contrive to get out of the game while leaving it running, you can even stream the entire desktop - adding Notepad as a non-Steam game and then pressing F1 to open the help is a common trick for doing this.

Yes. As of October 2018, any non-steam shortcuts added to the Steam client on the host machine will also appear in the Library tabs in those clients that can potentially stream games from there. You need to be on the same network and the clients should see each other, otherwise the shortcut will not appear.

All you need to do is open the library on the host machine and click ADD A GAME in the bottom left corner, then click Add a Non-Steam Game... and chose your game. If the game is not in the list, you can click BROWSE... and select the executable file manually.

You can stream any programs this way, not just games. For example, the picture below shows the wordpad.exe entry: 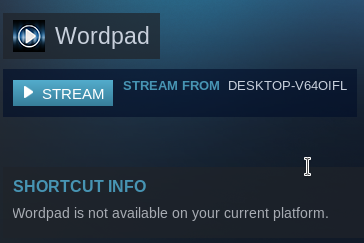 This is what Steam Support articles have to say about the feature:

Streaming non-Steam games in the Steam library may work but is not officially supported.

As for the old (rather hacky) method with alt-tabbing to desktop, the same article states:

If your game loses focus, Steam will start streaming the desktop so that you can get back to it. This is a feature of Steam In-Home Streaming.

So at least we know for sure that this functionality is intentional and thus likely is not going to be removed.

I could not find any information as to when non-Steam entries started showing up across machines, but Steam Client changelog from Mar 21, 2018 mentions this:

Fixed a bug where non-Steam games would use a desktop configuration when streaming if the controller wasn’t opted into Steam Input support.

So you could suggest that it's been supported from at least since then.

This is no longer true. Steam no longer allows streaming of non-steam games. (Posting this response as an update as GOOGLE still thinks this is the most relevant result. -.-)

0
Can I play a game and stream it at the same time ? (Steam in-home streaming)

1
Adding Minecraft to Steam's games library with multiple JREs
4
Steam Link streaming causes low frame rates
4
Does playing non-shareable games prevent sharing?
5
How do I use Steam In-Home Streaming between Fedora (client) and Windows 8 (server)?
4
Can I increase the number of threads Steam uses for in-home streaming?
0
Can I play a game and stream it at the same time ? (Steam in-home streaming)
4
Alternative to Steam's "add non-steam game" dialog?
2
Steam remote play together no streaming screen from mac host