How to find a specific NES pirate, unlicensed or bootleg game information?

As a kid, I've played a lot of NES. In my country, unlicensed games and famiclones were pretty frequent (boosted by the market reserve strategy to produce every component in-house), and games with generic names like Puzzle or F-15 Civil War got distributed bundled with those clones, and cartidges had labels like "Puzzle Game" or "JET game". However, there is this "Tank" unregistered game, that is neither Iron Tank nor Battle City and uses some sprites of both. The same word is printed on the cartidge label(that is minimalistic and with no artwork - below) and shows at the opening screen.

The gameplay was pretty simple: 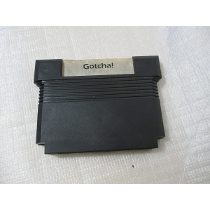 How can I find a game that is probably a bootleg and has such generic name that composes part of names of other registered NES games? Searching for "unlicensed" "tank" "pirate" "bootleg" show no relevant results, or results that are only related to other licensed games, and it's modifications.

Disclaimer: My first(closed) question about this subject was closed in May 2015 and there was none of the information below on the internet, meaning that maybe you will have to persevere and also give some time between your searches.

The main method I've used to find this game was, of course, affected by an immense luck: reading NES news and waiting for information about this unlicensed game to reach the internet. Searching for "unlicensed", "pirate" and "tank" got me nowhere in my hunt for this game. I would be happy by just finding some of the game screens and its music you know, to feel the nostalgia even if I didn't find the ROM.

I had almost given up on searching this game, but this "new wave" of unreleased Nintendo stuff we are facing today(Playstation Snes, Star Fox 2, Sim City for Nes) uncovered a Caltron 9 in 1 cartridge with unlicensed games that were never released, and it was on auction on Ebay.

As soon as I looked at the home screen and got the "Tank" at the list of games, I've searched for "Tank Caltron" on Google, that sent me to this video(as you can see, I'm the only one that commented on that footage). The only indexed game with Caltron publisher at NESGuide was the old 6 in 1 cartridge (that doesn't have Tank).

This also led me to another research based on this company alias (Youtube video description) and I could find that NTDEC was the most popular alias to this company in Brazil, hence the "NTDEC" at the opening. Searching for "NTDEC", "unlicensed" and "lists" I could find:

Things to pay attention for when searching for unlicensed games:

Other interesting sources I found during my hunt:

16
How can I replace the NES cartridge battery?
10
How does the Nintendo NES Four Score work?
4
NES screen blinking without a game
3
How to find path for the mazes in Metal Gear (NES)?
1
Are all 3DS NES Virtual Console game multi-player capable?
5
Is there in-game differences between 3 and 5 screws NES games?
4
How can I tell which rom version of a game is loaded on an NES cartridge?
2
How do I tell Legend of Zelda NES versions apart?
10
How do I remove rust on my NES motherboard connector?