I have bought one "XBOX360 controller for windows" (wired) to try playing Geometry Dash with a controller for a change, and have used it for a load of other games (MUGEN, PSX emulator games, some parts in the Danganronpa series, just shapes and beats...), and lately, a lot of Dragon Ball FighterZ, all of those games on PC.

I have already tried opening the controller and blowing its insides, but to no avail.

Annoyed by that behavior, I bought another one of those controllers, and now, I suspect it so start behaving the same way.

For further info, I used to plug the controller on an USB-3 port, in case maybe the port I plug it into is sensitive to some other signal.

What would cause that behavior to happen and how could I fix it?

This is likely from the mechanism which holds the analog stick in its neutral position being slightly worn so it remains in an active position when not being pushed. To compensate you should calibrate your controller to increase the left analog stick's deadzone. Here's what Xbox Support has to say on the subject:

How to calibrate your Xbox 360 Controller for Windows 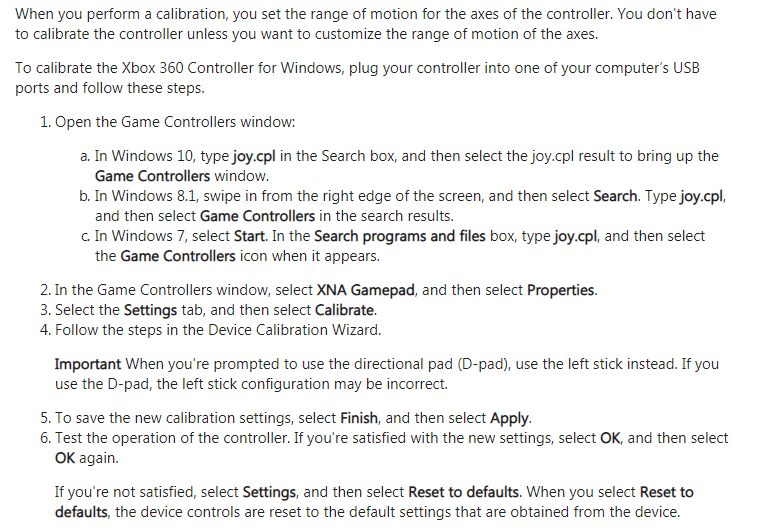 For future reference smacking the controller (or "percussive maintenance" as I like to call it) is usually overkill for this issue. Most of the time you can fix it by simply pulling the analog stick out from the controller, don't go so far as to pull the stick out of the controller though as that will cause further problems.

Not the answer you're looking for? Browse other questions tagged pc xbox-360 controllers .

2
Are there any tips for improving driving skills in racing games using an analog stick controller?
3
Can I configure the analog stick on my PS3 controller as "vehicle throttle" in GTA3 on Mac?
1
New Xbox 360 controller won't turn on with official charge pack but will with batteries?
1
Does the Steam Controller have a button to switch D-Pad and Analog Stick?
1
Minecraft PE with OUYA Controller?
0
Xbox 360 controller axis doesn't go back to zero (or center)?
3
Xbox 360 Controller - Left Thumbstick moves by itself going down and up all the time
4
Use an xbox controller with MAME for light gun games?
15
Why are the analog sticks on my Nintendo Switch controllers all starting to drift?