What's the fastest way to level up?

I did a playthrough with a friend: he (orange knight) spent his whole experience in strength, while I (red knight) spent mine in magic. Most of time, magic seemed to deal more damages, but it was pretty hard to hit several enemies at once. Even if, most of the time, I killed more enemies than he did, he always gained more experience than I did (sometimes, almost twice more).

Regarding the red knight, I've read that the he was much appreciated for his "Lightning Hold" attack that can "splash damage", but it seemed really hard to perform: you have to be on the exact same Y axe than your targets to make it work...

You'll get XP by hitting enemies. One hit stands for ~1XP on insane ~2XP. If you deal less damage it still counts as 1 hit. So when you have low strength you can hit the enemies more times thus getting more XP. You wont get XP if the enemy is already dead (but you can still hit them). In arena you wont get XP either.

A formula to calculate XP needed for the next level:

The Industrialist and the Fencer have a multi-saw-blade attack that hits multiple times really fast. You can level them up really fast by just spamming magic. 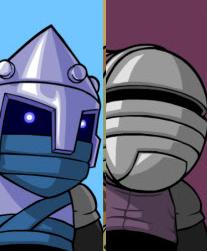 I already know that the Giraffey pet can help to level up faster (10% xp bonus),

This is true and will get you more XP by equipping him.
There are a few ways to level up fast.

Using the boomerang glitch on Industrial Castle. Throw the boomerang behind one of the standing poles when they come up. The boomerang hits many times per second. On insane mode you'll get like ~10.000XP.

Defeating infinite spawning trolls on Troll boss on insane mode. This is a good way if you know how to juggle and have low strength. XXY/SST* or XXYY/SSTT* across the screen will grant you ~20.000 a run. Try not to kill the boss. I've heard about people getting over 50k with this method.

I would recommend using Hawkster instead of Giraffey because Hawkster attacks enemies which will earn you extra XP. Hawkster also will get you fruit and sometimes burns the enemies. I have been using Hawkster and repeating the first levels with the barbarians. I have leveled up 15 times in 1 1/2 hours! (btw I'm using the pink knight with rainbow magic)

Go to the Marsh once you come to the big troll run to the bottom of the screen then run left all the way.

Once the big troll gets close to you, run behind the building with the open door and the big troll should stand at the front of the house. Face right and either shoot arrows or magic at the baby trolls that come to you.

So, I have been castle crashing for 5 years, and I have found a lot of ways to level up quickly. This is the one that I found works best:

Go to the Thieves Forest level, at the end you will be fighting the troll mother, wait for 8-15 trolls to come out, then juggle them back and forth across the screen. On normal mode i have gotten lvl 7 to lvl 48 in an hour. After you get to a high enough level finish normal mode and do the same on insane mode.

If you don't know how to juggle, here you go:

jump, and while in the air heavy attack, and then repeatedly light attack, do a heavy attack every 3 to 6 hits. IMPORTANT NOTE: ALWAYS move towards the enemy you're attacking when juggling.

So that is 100% what I think is the quickest way to level up.

You can go to full moon and have zero strength and juggle the stovefaces on the wall to get tons of xp!

Not the answer you're looking for? Browse other questions tagged castle-crashers or ask your own question.

12
The pink comb tantalizes me! How can I get one?
3
What is this boot-like thing buried in the first desert level?
8
Can you beat the beefy enemies without relying on ranged attacks?
5
What are the equivalent PC keyboard keys of the Xbox 360 game controller buttons shown on the screen?
3
What is the best Set-Up for insane mode in Castle Crashers?