With hopper taking items from chest in specific order I could use the chest storage as a program tape for whatever programmable mechanism I would like to use it. I've made a simple circuit that clocks removing exactly one item from the chest, feed it to a dispenser and have the dispenser "dispense it" before further actions are taken.

What I want: I load the chest with a sequence of two or more types of items, and get redstone signal on selected output when given item in sequence is of specific type. Say, I load it with "arrow, cobble, cobble, arrow, arrow" and on five consecutive "clock pulses" of my redstone clock I'm getting "1, 0, 0, 1, 1" on redstone output of the whole circuit.

Now there's a problem with actually converting the item type to a specific redstone signal. I'm fairly aware there are rather few items that could be used for that, and almost none to do that at reasonable speed, or can be easily removed for another item.

In general, how can I automate recognition of (even very few, very specific types of) items in entity form in vanilla Minecraft, in a reasonably serializable way? 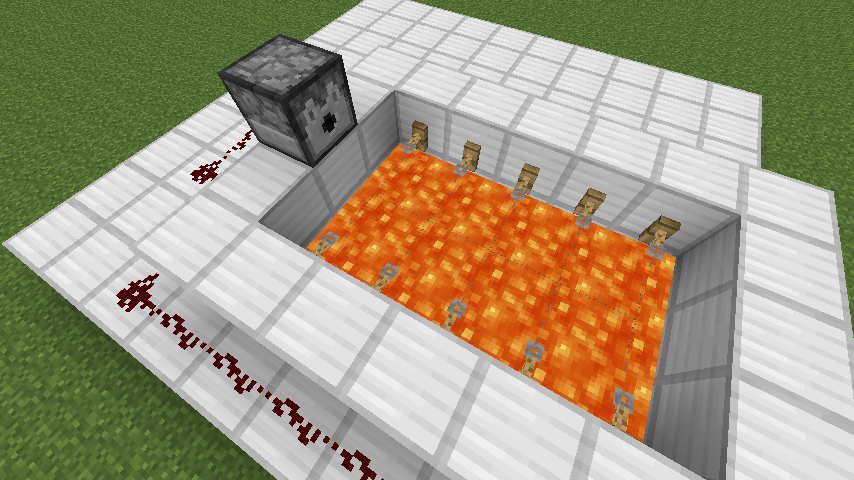 One of your items is an arrow, the other is any non-dispensing item like redstone.

Arrows will fire and miss the tripwire. Items will hit it then burn up, triggering a signal. You can use the items you suggested: arrow, cobble, cobble, arrow and the desired signal will be generated (well, the inverse).

Currently I came up with two basic designs exploiting hoppers and comparators.

An item stackable to 64 will produce redstone power of 1. An item not stackable will produce signal strength 3. That gives us a binary output plus "no data" option.

Now if we want more than binary output, we can chain that to another hopper, which will count the stackable items: load up to five stacks of these in the input chest, followed by a non-stackable item.

A potentially easier and more flexible method of achieving similar effect could be achieved through any retriggerable timer, where the non-stacking item is the trigger, and the time between occurrence of these (fine-tuned by number of stacking items placed between the non-stacking ones) is the stored value.

34
How do I create a very long delay with Redstone?
7
Reduce the size of redstone circuit
3
How can I make the redstone repeat a task x times and reset it self?
4
System with multiple inputs, but when one is activated it disables the other inputs
3
Please explain why this redstone minecart-loader works
1
Detect an Empty Hopper in MC 1.12.2
2
Item sorter with multiple items per tick
1
How to get a high, neutral and low signal from a comparator read single chest within the space of a single stack of items?
2
Synchronize two redstone pulse inputs