Immediate crash during start up

I updated my game on steam to the most recent release; 13.0, which came out on the 23rd. Upon starting the game, a new window which I have never seen before showed up: 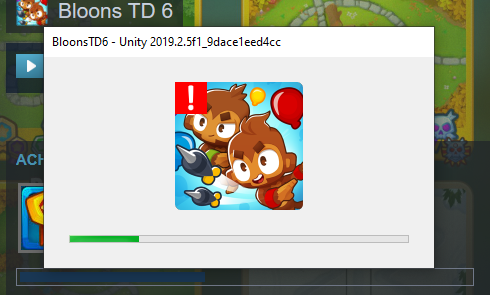 The loading bar that can be seen on this window only ever makes it to 50%, which takes less than 2 seconds, and then it crashes. Additionally, attempting to run the application puts two items on my taskbar. One of which has no icon attached to it.

App B is attached to the window with the loading bar, and App A never appears via a window. When App B crashes, App A lingers for a few seconds before crashing itself.

To fix this, I tried restarting my computer. After that, I received two full lock-ups which required emergency shutdowns, however, this may be unrelated to my problem. This did not fix the problem.

I also tried uninstalling and reinstalling the program, but that did not work either.

I took this problem to Reddit and Steam Discussions and no one has a solution as of now. I don't usually bring technical problems like this to SE, but I really want to get this working again.

If it helps, I am using a 64bit, win10, ASUS Laptop with 7.45 GB RAM. This problem first occurred directly after installing the update. This did not happen before the update because I used this program without issues the day before.

I have decided to see what happens in my Task manager. 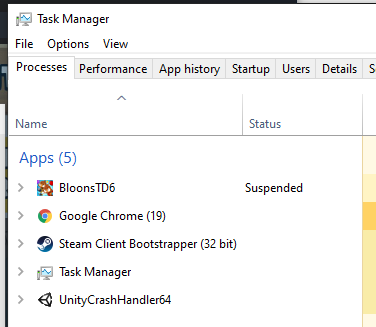 I noticed that BTD6 starts "suspended" for a while before its status changes to "Not Responding" and then crashing. I also discovered that App B turned out to be a crash handler, which means the app crashes every time without telling me why.

I have been emailing Ninja Kiwi directly back and forth for the past week and even they have no solution for this. They suggested I delete everything, as pressing "uninstall" on steam misses a few files. I ended up completely uninstalling the game and deleting these two folders as well:

After that, I completely restarted my computer another time. There was absolutely no trace of the game left on my computer.

After reinstalling it and testing it out, it still didn't work. There is clearly something that is not right with my system, but I can't figure out what because I never get an error message when it crashes.

Really there is no simple answer. Especially without any error code to go from or anything like that.

A game crash can be anything from a corrupted file, to your system not having the right drivers.

What can you do?

I should have answered this myself sooner. It took 2 or 3 weeks of email communication to get a fix, and of all the tests I was sent, there was one test that worked. The game is no longer in version 13.0 and I have not since gotten a crash, but this is what worked back then.

After performing this procedure, I haven't had an issue since. Even after updating the game, there is no startup problem. Although, even after the updates, this file remained the same from when I modified it. I am not sure if this edit is continuing to enable me to run the game, but for when the crashes were a problem, this is what worked.

Not the answer you're looking for? Browse other questions tagged technical-issues bloons-td-6 or ask your own question.